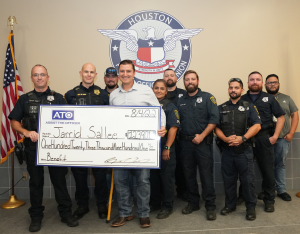 Assist the Officer’s fundraising capabilities continued to reach new levels June 10 with the total reaching more than $120,000 to benefit Officer Jarrid Sallee, who is still recovering from wounds suffered in a violent May 4 traffic stop.

Sallee, his wife Elise and three infant daughters, were in attendance and undoubtedly served as inspirations to the multitude of officers and their families and friends who helped make the event an overwhelming success.

It was the traditional format that featured plates of barbecue, raffles and live auctions conducted by Alan Helfman of River Oaks Chrysler Jeep. The amount raised was even more significant when the miniscule overhead was subtracted, according to event coordinator, Senior Police Officer Chris Meade.

“It was a huge success,” Meade told the Badge & Gun. “It went way beyond what we anticipated. We’re waiting for the final numbers. The line to get in was two blocks down the road. It was impressive.

“We sold out of barbecue. We had three whole briskets left and that was it. We cooked 68 briskets, 90 pounds of chicken and I don’t know how much sausage. We had to buy more beans and potato salad and still ran out.

“For all of it together we were only out of pocket less than $3,000. Nearly every dime was able to go to Jarrid. All the food was donated. So were the raffle items and what was sold in the auction. It was impressive. It also was a lot of work.”

In addition to Helfman, special thanks go to Walmart – which provided the food – Lowe’s and Home Depot. The Cold Steel Cookers, a cooking team from Brazoria County that regularly competes in area cookoffs, “were cooking for 48 hours” to prepare for the benefit, Meade explained.

“The guys in the unit reached out to them and they really came through,” Meade said, reflecting on the teamwork that went into planning the ATO fundraiser, which was held in the usual place – the Breck Porter Building on the HPOU campus.

Meade’s assignment is the Highway interdiction unit of Traffic Enforcement. He was serving as backup to Sallee and his partner, Matt McMurtry when a suspect they pulled over suddenly opened fire on them.

Meade said one bullet was deflected by Sallee’s flashlight but another one stuck him in the leg, causing the severe wound.

The shooting suspect is currently in federal custody. He was out on a Harris County bond at the time of the shooting on a charge of methamphetamine production. Sallee and McMurtry wounded the individual in the violent confrontation. As he recovers from those wounds, he also faces federal drug-related charges from the DEA and ATF.

“Jarrid is at home with his family. He is in physical therapy every week. It’s going to take time for him to heal. He’s waiting for the doctors to tell him the next steps.”

Thanks to Assist the Officer, hard work led by Meade and some generous donors and bidders, the medical expenses won’t be part of the pain.