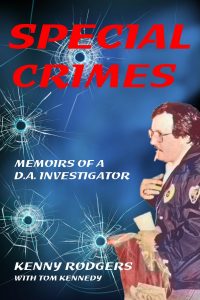 A while back – a long time ago, actually – I was a police reporter at 61 Riesner.

Before long I was transferred across town to cover the Courthouse as a reporter for The Houston Post (RIP).

As an eager young newsie, I developed all kinds of sources in this court-infested environment. You expect the really good ones to turn up – and they did.

Today, decades later, I realize that DA investigator Kenny Rodgers was head and shoulders above all others – well, maybe other than Johnny Holmes, a great crime-fighting district attorney from the 1970s until the 1990s.

I quoted Kenny in numerous crime stories after having identified him as the expert at unearthing suspects no one could find or wiring up witnesses willing to risk their safety in order to get him probable cause.

After a few years of Kenny chasing bad guys and me writing about them, he turned to me and said, “One of these days I’m going to write a book about all these fun cases. I want you to edit it.”

Well, that was around 40 years ago. He wrote the book, I edited it and it’s out!

It’s entitled Special Crimes, the title derived from the Special Crimes Bureau, a distinctive division set up to investigate and prosecute the most complicated cases involving drug dealers, pornography peddlers, hitmen, elected officials on the dark side and even an axe murderer named Karla Faye Tucker.

Usually the cases involved more than one law enforcement agency in Harris County. They almost always involved the Houston Police Department – to the extent that two HPD detectives were assigned full-time to Special Crimes.

HPD officers play prominent roles in most of the 30 chapters of Special Crimes the book.

Kenny started as the “baby investigator” who found a witness that couldn’t be located by HPD, the FBI, the State Bar of Texas and even the Texas Rangers. This individual provided the evidence needed to prosecute Texas Supreme Court Justice Donald B. Yarbrough for aggravated perjury and forgery, resulting in his resignation and a prison term.

It was not Kenny’s only success story, as he went on to become the chief investigator under renown DA Johnny Holmes.

His memoir details the inside investigative stories alongside aggressive and very capable police officers, fellow investigators and prosecutors. Like I said, HPD investigators are prominent in many chapters, many of them teaming with Kenny to nail down suspects and lead them down the path to Huntsville.

Kenny became a good friend and colleague with Houston blues such as Sam Nuchia (later police chief), Jerry Carpenter, Earl Musick, J. C. Mosier and Bobby Blaylock. Each of these guys are part of the heroics and successes in team-oriented efforts to thwart the bad dudes. In fact, Kenny often acknowledges the importance of teamwork in law enforcement.

Getting the Bad Guys

Almost every chapter entails a different bad man or woman and what policing strategies were used to run them in and get them charged. Now, as officers well know, sometimes you can arrest them and the charges don’t stick or a jury comes back with the wrong verdict.

Admittedly, some chapters end without justice duly served. Kenny, now retired and serving as a private investigator, still adamantly makes the case for hard time in these examples.

Some of his cases were Page One news, while others involve suspects the public doesn’t recognize as household names. Besides Yarbrough, other notable targets in Kenny’s crosshairs are State District Judge Garth Bates (bribery), Karla Faye Tucker (axe murderer) and the police character known as “the Black Widow” – Catherine Mahaffey Shelton, the subject of both Chapter 1 and Chapter 30. (I won’t give anything away; you’ll have to read the book).

As police officers well know, not all the really detestable criminals make the news pages or the evening news. Kenny tells us all about those folks, too. There is The King of Harassment in Chapter 7, for instance, who gave hell to prosecutors investigating him by filling out enough paperwork to see that they received dozens of unwanted magazine subscriptions.

This character was insufferable. At least three of the women he dated, stalked and harassed attempted suicide. What happened to him? Ah, read the chapter! But we will tell you he’s not behind bars. Never has been for very long.

How do you get the book?

As of this writing, you have to go to Amazon.com, type Special Crimes by Kenny Rodgers in the search window and order either a hard copy $19.95 or a Kindle version ($6.99).

We hope distancing and masking requirements due to the coronavirus will end one day soon so book signing sessions are possible.

I have written five books and edited six but none was as much fun as this one. Of course, I didn’t get shot at or blown out of a window like the author did. I wasn’t abused by “The Scoundrel” or befriended by “Big Al,” the Confidential Informant (CI) that Kenny got to know and trust so much that the two became close friends. In fact, Kenny delivered Big Al’s eulogy.

We see the “lighter side” of law enforcement, the accounts that you never see except in books like this one. Not only was Kenny the DA’s expert at finding elusive suspects, he also learned to “wire” witnesses and rooms with the best of them. You can’t beat tape-recorded evidence. One of his wires remains in the air conditioning duct of a hotel room near Bush Intercontinental Airport. It’s in Chapter 8 and helps nab a suspect on Conspiracy to Commit Murder charges.

That was fun but not as, shall we say, “challenging” as wiring up a not-so-modest female witness. Careful about sexual harassment in such situations, Kenny told the witness where and how to tape the high-tech device at the proper spot on her amble chest.

“I’m not going to help you,” he said firmly. “You will have to do it yourself.” The woman adjourned to the nearby bathroom.

Just minutes later she emerged striped to the waist, the mic taped in place. “Did I do it right?” she asked, innocently.

Kenny was speechless! Yet somehow, he found the words to tell her she did the job right but needed to put her bra and blouse back on her body.

As we learn in another chapter, a half-naked witness is not all that can go awry when a wire is involved.

Another very attractive blonde undercover witness successfully attached the wire inside her blouse in order to get recorded evidence against her boyfriend. He had been out of town and hadn’t seen her for a number of weeks.

Once he entered her apartment, he made it clear that he wanted to have sex.

The witness panicked, knowing full well that if he pulled off any of her clothing he would find the transmitter. Meanwhile, upstairs monitoring the audio, Kenny and his partner were rolling on the floor trying to muffle laughter.

“What’s that?” the boyfriend asked, still chasing the wired-up woman around the living room.

I can’t tell you what happened. I don’t want to give away anything that may be used as evidence.