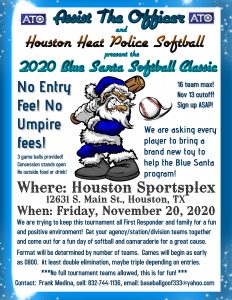 HPD officers are already in the Christmas spirit with a plan to put up toys for Blue Santa in order to play in the first-ever Blue Santa Showdown softball tournament set for Friday, Nov. 20 at Houston sportsplex, 12631 South Main.

Co-sponsored by HPD Blue Santa and Assist the Officer, only toys will change hands to participate in the tournament, coordinated by HPD’s championship softball team, the Houston Heat.

“There will be no entry fees,” Heat pitcher and tournament coordinator Frank Medina said. “All you need to enter is a new toy from every player. All the toys will be turned over to Blue Santa for this year’s toy distribution plan.”

The tournament is open to Houston area first responders. Medina expects teams from many HPD divisions and was quickly filling up a 16-team bracket.

The HPD Blue Santa program brings out the best in those with Christmas spirit the year round. Participants arrange monthly paycheck deductions that accumulate throughout the year. At Christmas the money is used to purchase presents for the underprivileged children, aged 2-13, designated by the officers.

“Blue Santa has been in existence since 1984 and has been providing gifts to underprivileged children in Houston and the surrounding area during the Christmas season,” Blue Santa coordinator Martha Bailey said.

“The program is funded 99 percent by HPD officers. Each of the participating officers have their check deducted in the amount they choose and at the end of the year that officer can pick up gifts so that he or she may distribute them to the children they have chosen.”

Senior Police Officer Bailey said, “What a great way to give back to the community. Not only do you make an impact on the children, but they also see another side of the officer that many times they don’t get to see.”

Medina, the Heat and ATO are all in on that tenant and Medina said many in the department have been seeking ways to perk up morale during the coronavirus pandemic during a rather depressing year.

No, the Heat will not field a team, he said. Each of the all-star-caliber players will take the field for an appropriate HPD division team.

Medina said there are no limits to the cost of the toy or a specified age group for each toy. “Every toy we get will be turned over to Blue Santa. We think this will be a lot of fun for a great HPD tradition.” The toys do not have to be wrapped.

“For those officers who are not a part of Blue Santa, we invite you to join us. Unfortunately, many children only see the police when there is something wrong or  a crime has occurred.

“This enables us, the police officers, an opportunity for the children that live and play in the community that you patrol to see you in a positive light, as a hero, as the guy or girl that saved Christmas by providing them with gifts.”