HPOU honors Detective Garcia as Investigator of the Month

The Houston Police Officers Union announced the Union’s Investigator of the Month honor to Detective Ramon Garcia for his work in a September kidnap, robbery and sexual assault case. On Sept. 29, a jogger in Memorial Park was kidnapped while training for a marathon in Memorial Park when the male suspect grabbed her from behindRead more

The Union selected Officer Jordan Patton as its December Patrol Officer of the Month in its general membership meeting on Dec. 2. On Sept. 5, Officer Patton, while patrolling Bissonnet Street, observed complainant KR, walking along the sidewalk wearing a tight mini dress which revealed her breasts – a violation of the City of HoustonRead more

Editor’s Note: Officers Montoya and Hayden were recognized at the October general membership meeting for their adept response to a sexual assault call. However, the nomination for Patrol Officers of the Month was not submitted until after the meeting. The Union officially recognizes them as the second pair of officers to be recognized as thisRead more 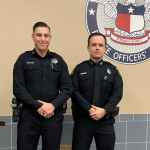 Tippit, Graham honored as Patrol Officers of the Month

Officers Travis Tippit and Alekesei Graham were recognized as Patrol Officers of the Month at the November general membership meeting. Officers Tippit and Graham responded to a Code 1 burglary of a residence in progress call. Upon arrival, they were told by residents that a suspect had broken in and taken a female into theRead more 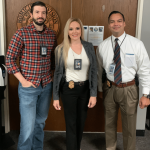 The HPOU presented Investigators of the Month recognition to Officers Kris Persad and Angeline Grimes in the November general membership meeting. Officers Persad and Grimes are investigative partners in Homicide. In the last couple of months they have received two high-profile cases, both capital murders, that upon initial assignment had low solvability factors. The firstRead more

Astuteness on the beat and the most basic policing instincts spelled success for Officer Randal Johnson, HPOU’s October Patrol Officer of the Month. Johnson’s work corralled the suspect in a knifing incident June 9 at the Sago Palms Apartments. HPD got a report of a cutting that the initial officers on the scene found toRead more

HPOU selects Reid and Barker Investigators of the Month

The Houston Police Officers Union named Officers Shawn Reid and Adam Barker as the Investigators of the Month in the Oct. 7 general membership meeting. The investigation that resulted in this recognition began Jan. 24 when the two were assigned to deal with a Street Takeover Mob gathered at the intersection of Enclave Parkway andRead more 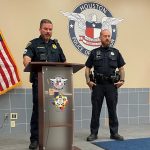 The Houston Police Officers Union presented Patrol Officer of the Month honors to Officer Christopher McCain in the September general membership meeting. McCain works Kingwood Patrol. On July 5, Kingwood Patrol Officers McCain and Samuel Cleveland were dispatched to a disturbance located at 200 Northpines Dr. The location was an apartment complex, where the officersRead more

Going into the new year, we always get excited and look forward to starting out fresh and getting things “in order”.  This year was no different as we rang in the new year trying to stay positive.  It can often be hard to look forward to a new year when we have so many big issues that we are facing as an organization.

First and foremost are the staffing issues that we are seeing at every station across the city.  I worked New Years eve at Southeast and roll call consisted of about six people for early side and another six for late side for two districts.  We were non-stop the entire night!

Our manpower issues are being exacerbated by the current Covid is spike. We had over 420 officers out as of New Year’s Day which is leading to dangerous situations on the streets. We must

You may be asking: What is involved in Contract Negotiations?

Every time we work on a contract, we do a survey of what people would like to see in the contract.  In the last survey in 2020 we only had 51 members who responded, and it was obvious that most were supervisors. Since that survey, I have received about 40 more emails regarding the writers’ “wish list” for the contract. Overwhelmingly, pay was on the top of the list for items in the contract. Second was more time off.

We are only in our second meeting over the contract and are bound by a confidentiality agreement. So discussing issues is prohibited.  But I wanted everyone to know how the process works as many do not understand the intricacies of Meet and Confer.

Being in a right-to-work state, it is a process that seems to work better than collective bargaining.  In northern

I have heard many people say that there are issues with the IAD process and oral interviews. Most are not aware that the ability to conduct oral interviews is in Chapter 143 of the Local Government code and has been in our contract since the first one in 1998.

Acevedo was the first chief to use the interview technique which he brought with him from Austin. We spoke with Chief Finner several times regarding the issues with the oral interviews and their effects on the morale of the department.  He met with us and agreed that not all cases should be oral interviews, and immediately changed the policy.

Now, oral interviews will be reserved for serious infractions that could be considered criminal, such as use of force or anything sexual in nature. This all being said, I believe it is im

As the deadline looms, there are still no answers from the city

We have been working very hard on the latest “mandate” from the mayor.  The very first time we heard about the mayor wanting to have vaccine mandates was during a weekly City Council meeting when he stated that he was looking into all city employees get vaccinated.  We immediately began to research if this was legal, and what we could do to prevent it.  Our attorneys reached out to the Labor Relations Institute and found that there was case law and actual Supreme Court rulings on this, though the Supreme Court case was 1905.  I believed that there must be other case law out that would prevent this from taking place.  We do have constitutional rights, right?

I know we have all paid very close attention to the Methodist Employee case.  The ruling from the court was that they can

Leadership is a word tossed around by many to label the head of an organization.  But what is a real leader?  Is it a chief of police, is it the commander at the station, or is it the hard worker on your shift?

There are plenty of supervisors out there who think they are “leaders.” But let’s be honest, not every supervisor is a leader.  You can teach anyone to be a supervisor, but you cannot teach leadership.