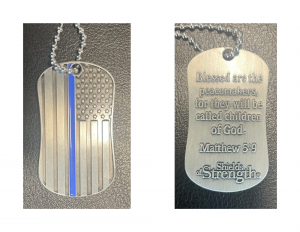 As a colonel in the United States Army, David Dodd commanded troops in war zones like Iraq and Afghanistan. He showed total devotion to his troops and constantly sought ways to keep morale up and provide faith and hope.

Col. Dodd found that the best way to strengthen and encourage American soldiers was by constantly reminding them that they are never alone – that God is always with them.

A strong man of faith, Dodd felt that a constant physical reminder of this scriptural promise was a dog tag with a quote from the New Testament. Each tag has a thin blue line running through it. Engraved on the solid steel tag is Matthew 5:9:

Blessed are the peacemakers for they will be called children of God.

First Dodd provided tags to every soldier in his brigade. He didn’t stop there. He was inspired by the desire to keep on the mind of each and every American solider that God is always with them – on the battlegrounds of the world or on the safer home grounds of their country. He found a method he could use to achieve this goal.

The colonel retired in 2011 after serving our country for 27 years, many of them as a commanding officer in combat. He told the Badge & Gun that he wanted to give back something to every American solider. He decided to form a nonprofit called Point 27, whose purpose is to provide a tag with God’s message to each member of the country’s armed forces.

Where does the nonprofit’s name come from?

To make donations to Point 27:

He also made the point that the dog tags are cost-free and that the recipients are not required to wear them. The quote from Matthew comes from what many consider to be the most important segment of the New Testament – the text of what Christ said in the Sermon on the Mount.

“2016 is when we added first responders with the thin blue line,” Dodd explained. He estimated that there are about 1 million police officers in the United States. He keeps tabs and figures and estimates that he and other Point 27 volunteers have distributed 180,000.

Dodd recently visited the HPOU staff and supplied 5,200 dog tags – one for each Houston police officer.

Plans are for the Union to call each division this summer to get head counts. The appropriate number will then be sent to division commanders.

“I’ve enjoyed being around police officers,” the retired colonel said. “I believe they have the same DNA as soldiers. The mission is bigger than themselves. They’ll give 110 percent for not much money. I wish America could see what these guys go through.”

“This is a 100 percent volunteer organization,” he said. “There are no salaries, no compensation or benefits. We have 30 volunteers spread out over 24 different states. The volunteers are active or inactive law enforcement or military or a parent of a fallen officer or soldier.

A key member of the volunteer effort is a Texan who manufactures the dog tags.

He is Kenny Vaughan of Beaumont, who operates Shields of Strength. Dodd visits Vaughan quite often on site where Vaughan stays busy creating jewelry that expresses one’s faith. He sells the dog tags to Point 27 at below cost. Dodd said Vaughan and his wife Tammie provided more than 1 million dog tags to America’s fighting forces.

“When I was in Afghanistan, I would email him and he would send me anything I wanted for the troops – without pay,” Dodd recalled.

As one might expect from an individual with Dodd’s dedication, he didn’t stop with the dog tags. He also created a necklace for the family members of fallen soldiers and police officers. It replicates a folded American flag on one side and a scripture on the other. It is John 15:13, which says:

Greater love has no one than this: to lay down one’s life for one’s friends.

As a solider on a battlefield or a police officer on places like Houston streets, Dodd keeps the mission simple and direct, saying:

“Use a tangible method to show appreciation for the services of soldiers and police officers, using a physical reminder we are not alone – God is always with us.”