Contrary to what might be happening in other big cities across the nation, Houston community leaders and businesses are helping their local police officers do their jobs in every safe way possible.

There is no finer example than Elite Mixed Martial Arts (MMA) and its owner, Frost Murphy. Murphy and MMA team took note of ways they could help HPD officers and quickly determined that a state-of-the-art tactical restraint training course was in order.

Beginning Sept. 1 and lasting throughout the month, Elite will offer the course free to HPD officers and other Houston area first responders.

Murphy said the course will be available at each of the five Elite locations on a schedule that will accommodate all three shifts.

“For the last 20-something years we’ve trained the military, law enforcement and the public,” Murphy explained. “We have noted that officers are finding it difficult in circumstances like those recently depicted in the news to put the handcuffs on someone who doesn’t want them.

“We want to give officers some tools to help them in their job.”

He described Elite, a martial arts school founded in 1999, as “a place for training a 3-year-old to an 83-year-old” in martial arts such as basic kick boxing, wrestling, Brazilian Jiu Jitsu, and the mixed martial arts.

“We want to help people from all walks of life to stay in great shape, good health and teach them how to defend themselves,” he explained.

He pointed out that although the classes start Sept. 1 and that HPOU members won’t get their Badge & Gun until two days later that Elite will go the full nine miles to accommodate the work schedules of officers. “They can sign up anytime throughout September. We will be reviewing the curriculum throughout the month. If they miss anything, we will get them up to speed.”

The five Elite locations are:

“They can sign up anytime in September and go to any of our five locations,” Murphy said.

Officers may call any of the above numbers at the location of their choice. Or they can enroll by going to: elite-mma.com.

Elite MMA has trained numerous officers from Houston and other jurisdictions over the past 20-plus years. Murphy said his staff is very familiar with problems officers face every day they are on duty.

“We are all about how to restrain someone,” he explained. “Officers come in and try to arrest a suspect and they lay down on their arms and scream, ‘I’m not resisting. I’m not resisting.’ We want to teach them how to get his arms out from under his belly without having to beat up the guy.

“We want to deal with any type of scenario where an officer has to restrain someone. We want them to do it safely. Our course also is available to firefighters and EMS personnel who have to restrain people at times.”

Murphy’s MMA gyms have served more than 5,000 people on an annual basis – “not only law enforcement but Houstonians from all walks of life.

Each session is an hour-long and could serve 50 or 60 officers or even more. Murphy said if demand warrants, he will schedule extra sessions at flexible hours. “Officers can come five days a week. If they miss a day, we can catch them up the next day,” he said.

“We are offering this training because we saw all this on the news and decided what we can do to help police officers. The training that most officers get out of the academy is not enough. Officers go on all these different calls and often run into all kinds of violent people. We want to help them better deal with these dangerous situations. We want to help them address every need they have to do their job better and more safely.” 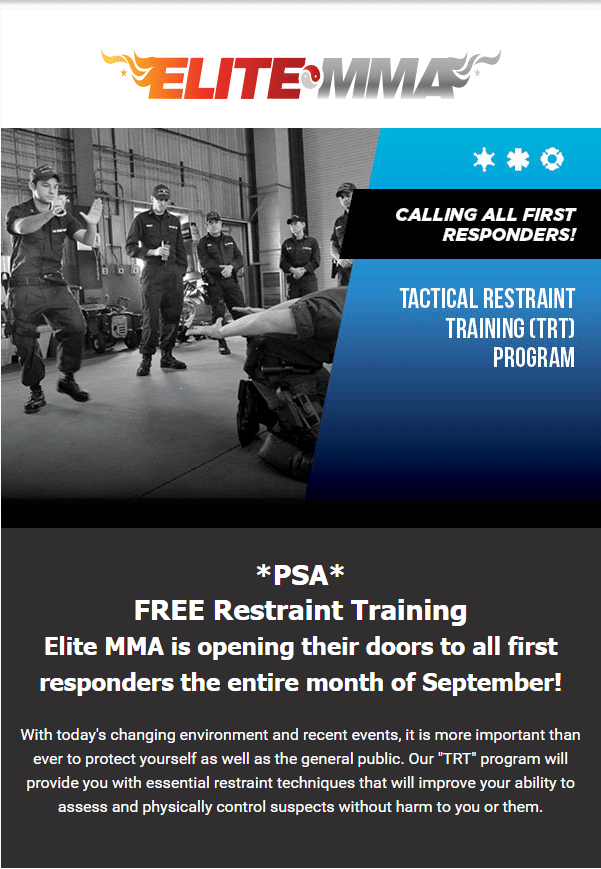