**If you are a valid ticket/reserved table holder for the upcoming Gala from a purchase made in 2020 or 2021, please contact ggregory@assisttheofficer.com to RSVP by Monday, January, 31.  If you do not RSVP, you will have issues at check in.** 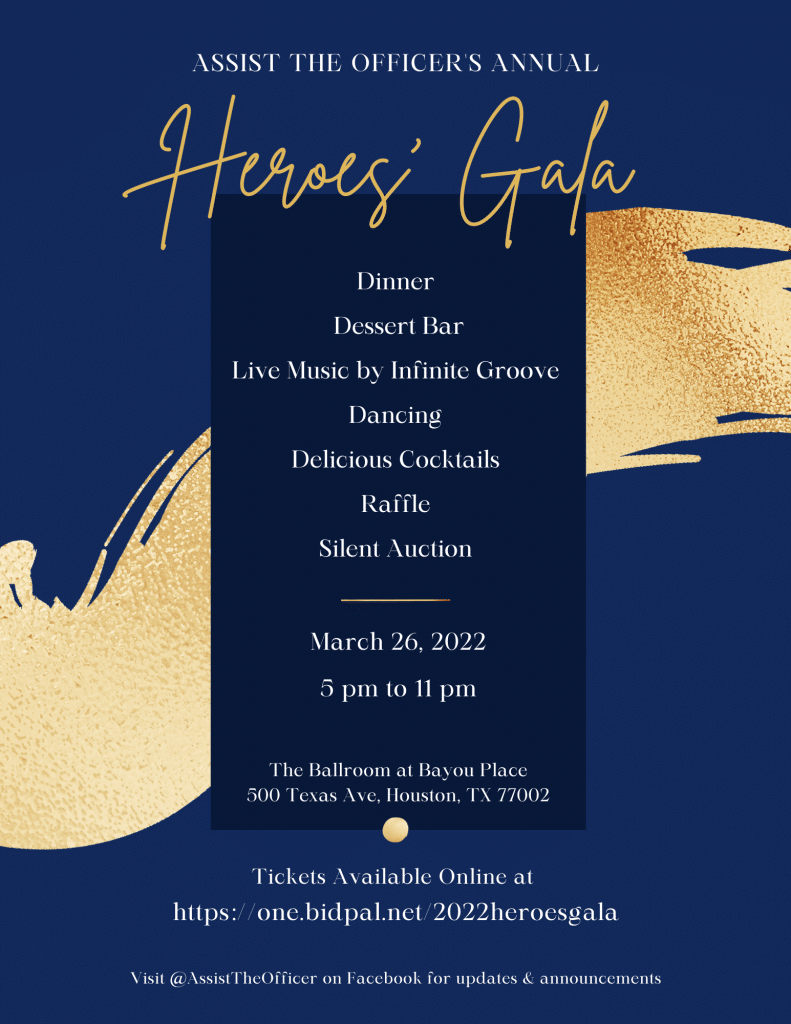 The annual Assist the Officer Heroes’ Gala set for March 26 at The Ballroom at Bayou Place will be extra special this year.

Not only will ATO recognize the Patrol Officer and Investigators of the Year for 2022 but also for 2020 and 2021 as well.

The coronavirus caused postponement of the last two scheduled galas. As has usually been the case, the steadfast ATO will not be deterred from these special recognitions any longer.

This year’s cocktails, dinner and dancing extravaganza begins at 5 p.m. Saturday, March 26 with hors d’oeuvres before seating for dinner at 6 pm and the special honors ceremony as everyone finishes desert.

ATO will furnish Union members with many updates from the first of the New Year right up until the Gala. Go to assisttheofficer.com or visit them on Facebook @AssistTheOfficer.

There also will be lots of raffle and auction fun on the sidelines.

Up for raffle are men’s and women’s Citizens watches. Tickets are $5 each and only available online at one.bidpal.net/2022heroesgala.

And you can look for silent auctions of sports memorabilia and other items designed to raise funds for Assist the Officer, which considers this Gala the first of numerous fundraising activities throughout 2022.

Let’s get to the recognitions.

Announced in 2020 but to be officially honored at this event are 2020 Officers of the Year Ashley Kelley and Investigator of the Year Jeremy Medina.

Announced in 2021 but not officially recognized until this year are 2021 Patrol Officers of the year Officers Jordan Stepp and Eddy Powell and the Investigator of the Year Detective Lisa Gonzales.

Patrol Officer of the year 2022 nominees include the following monthly HPOU honorees. (There were no Patrol or Investigator honorees for July, in which there was no monthly general membership meeting.

Because of their preliminary investigation and scene management, a murder suspect was identified and arrested within 48 hours.

For his leadership in a unit that captured 83 felony suspects wanted for various violent crimes, including murder, and his off-duty leadership of a non-profit helping underprivileged children and catastrophically injured officers, , officers who have passed away and children suffering from leukemia.

For their work responding to an early-morning aggravated carjacking. They got into a shootout with the suspect, who suffered wounds. Officers maintained pressure to the gunshot wound until paramedics arrived, preserving the life of gunman.

For his rundown and arrest of a murder suspect involved in a three-car accident. The suspect was also wanted for seven felony warrants, five misdemeanors and was later charged with federal felony possession of a firearm 48 hours after the arrest.

For their relentless pursuit of the sexual predator who victimized a 10-year-old continuously over a five-month period. Their effort resulted in getting a full confession from the suspect.

For his response to an aggravated robbery in which two suspects were involved in a total of four such incidents on that one day. He confronted the suspects just as one was drawing his pistol to rob the fourth victim of the day. The officer arrested both men, resulting in charges for multiple robberies, narcotics possession, felony evading and the recovery of property and stolen money.

For their work in ending the exploitation of an 11-year-old girl who was appearing nude on a phone app used by at least 10,000 live viewers. The officers tracked down the phone and rescued the girl from further exploitation.

For his response to a fight between a suspect and a fellow officer in which the officer had been shot three times. McCain wrestled the gun away from the suspect, subdued him and was able to retrieve a tourniquet from his fellow officer’s duty belt and use a pocket knife to cut away the officer’s body armor, finding and treating two more wounds – saving his life.

For his instinctive reaction in the pursuit of a wounded knifing suspect. Johnson followed a suspicious vehicle into an apartment complex where he saw the vehicle pick up the suspect, who was soon apprehended and admitted the knifing.

For their response to a burglary in progress in which they caught the suspect sexually assaulting a female resident and took him into custody.

For recognizing that a prostitute on Bissonnet was actually a victim of sex trafficking. Patton got her medical attention, counseling and a trip back home in Arkansas. He arrested the perpetrator, taking him off the street and out of the sex trafficking racket.

Investigator of the Year nominees include the following monthly HPOU honorees from 2021.

For his work in a continuous sexual assault case involving two boys, 7 and 8. The suspect was their 16-year-old uncle, who proved to be quite elusive over a one-year period in which Stanfield never gave up and apprehended him after he ran away from CPS custody three times.

For his work thwarting two suspects who had become experts in identity theft. His work resulted in charges against a man and woman in connection with fraudulent possession of identifiers and tampering with a government document – by uncovering more than 100identifiers involved in 40 cases.

The two investigators, faced with a scene that consisted of three spent casings, bags of clothes and a puddle of blood, tracked down the woman who shot the victim and the two men who helped dispose of the body.

Assigned to investigate a suspect in multiple fentanyl overdose deaths, Khan contacted the individual on social media and bought illegal drugs from him on several occasions. She finally effecting his arrest in a buy/bust in which a firearm and three grams of fentanyl were recovered along with evidence that resulted in additional DCS charges.

Volunteering to investigate an abandoned vehicle filled with bullet holes and containing shell casings and marijuana, Cimeni discovered a social media video depicting a shootout involving the vehicle. He used additional video, latent prints and DNA samples from the vehicle that led him to interview key witnesses and identify the shooter involved.

Assigned to investigate the stabbing death of an 80-year-old man, Holbrook and Roscoe interviewed witnesses who led them to a nearby apartment complex, where they surveilled the location, arrested the suspect and recovered the murder weapon.

For his investigation resulting in the arrest and charges against the stepbrother of sexual assault of a nonverbal Autistic six-year-old boy. In a complicated investigation made difficult by the victim’s handicaps, the detective eliminated the stepfather as a culprit and eventually acquired evidence that resulted in charges against the stepbrother, who wrongly thought his non-verbal victim wouldn’t be able to tell on him.

For her investigation involving an 84-year-old female victim with dementia who was victimized by an individual who used her debit card to put at least $32,000 in his own pocket. Her elaborate investigation resulted in debit card abuse charges against the suspect and saved further abuse of the woman’s estate.

For their investigation which tracked down the suspect who fired shots at a vehicle during a mob scene on the west side. The suspect shot at the vehicle’s occupants as one tried to call 911 to complain about the mob violence. The officers used video of the incident posted on social media to identify the suspect.

For their work which resulted in capital murder charges against suspects in two high-profile cases. The first was a robbery gone bad in which a 10-year-old girl witnessed the murder of her father and the second involving the murder of a five-year-old boy.

For his work investigating a kidnap, robbery and sexual assault case involving a female jogger in Memorial Park. The suspect stole the woman’s cash, used her iPhone to transfer her bank account to his, took her to a secluded spot in the park and sexually assaulted her. Garcia used video footage and the suspect’s use of the stolen cell phone to track down the suspect, who was eventually caught while facing other charges that included a number of other violent crimes.