Assist the Officer will recognize a young Houston police officer who was met with a fatal accident at home while making repairs with the April 8 fundraiser for the family of Officer Oleg Pavlov.

Officer Pavlov suffered the tragic fall at his family home in The Woodlands on Nov. 18, right before last Thanksgiving.

Officer Oleg Pavlov migrated from the Ukraine with his wife and family but got to the HPD as fast as he could. He had been on the force for two years, serving in North Patrol.

Pavlov was installing insulation in the attic of the two-story home when he took a bad step and went through the ceiling, falling to his death. He was 37 years old.

ATO immediately went to the aid of his surviving wife and three daughters. The soonest possible fundraising date available was Friday, April 8.

That’s coming up just one week before the publication of this reminder!

Sgt. Jennifer McQueston of North Patrol is urging all of her fellow HPD officers to attend, beginning at 11 a.m. in the Breck Porter Building, where barbecue will be served at $15 per ticket. McQueston and other North Patrol officers have been touting the event for several months now. HPOU members know the tasty BBQ can always be picked up and taken back to the station of their choice.

But the fundraising activity, as always with ATO and the Union, will include sports memorabilia auctioned by Alan Helfman of River Oaks Chrysler Jeep, along with other donated items included a Red Dot sighting device, guns, knives and gift baskets.

“We are having this benefit so that Officer Pavlov’s family can stay in America,” Sgt. McQueston explained.

The sergeant made this point months before the beginning of the war in Ukraine that is displacing millions of civilians.

She said Pavlov’s wife, Alyona Pavlova, is a nursing student working at Memorial Hermann on the verge of earning her degree. Her children include a 12-year-old daughter, who is Houston Livestock Show & Rodeo scholarship winner and artist.

“This will be auctioned at the fundraiser and is expected to draw quite a bit of attention from those bidders in attendance,” the sergeant said. 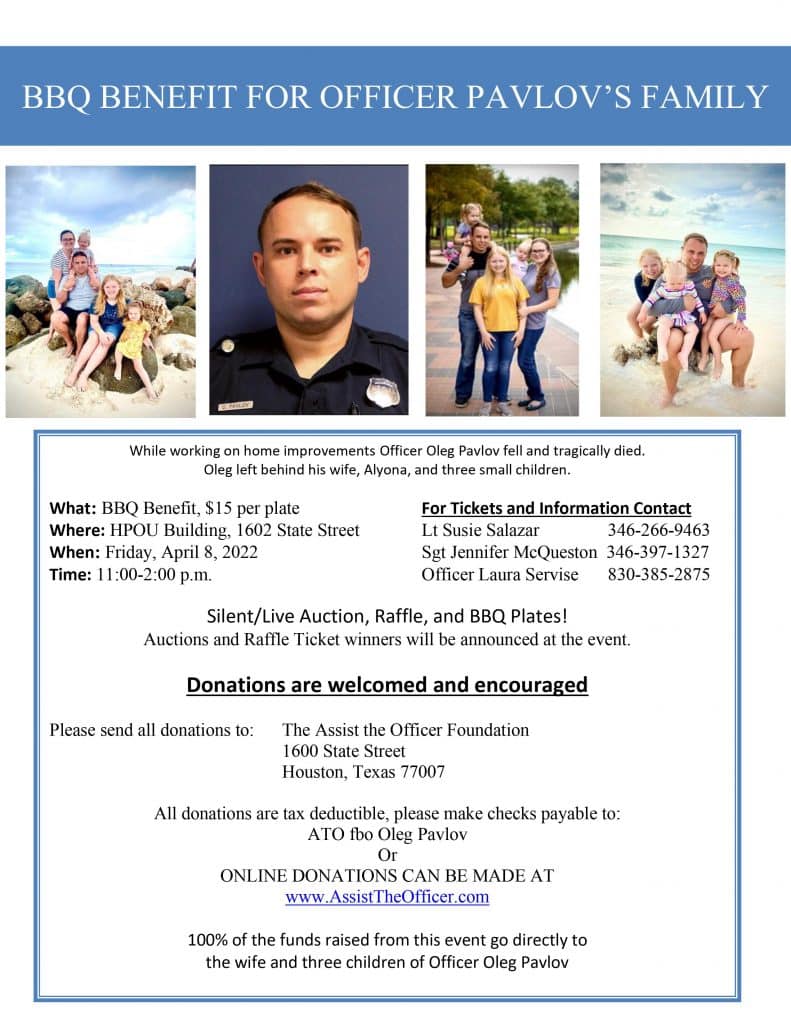