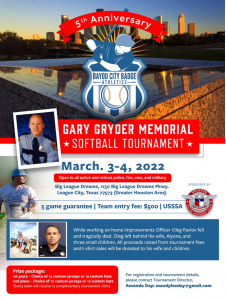 This year’s Gary Gryder Memorial Softball Tournament will raise funds benefitting a fellow HPD officer who loved doing exactly what Gryder did – improving the home for the family.

Right before Thanksgiving Officer Pavlov fell through the ceiling of his family home while installing attic insulation. Further details about another fundraiser are included another story in this issue.

It is opened to all of HPD’s current and retired officers. They are not the only ones qualified for the tournament who could put together a team. All first responders from the Houston area as well as military personnel may enter a team.

Gryder, a long-time HPD officer and an HPOU board member, was struck and killed in 2008 when a driver disregarded the barrels and signs. It happened on the Katy Freeway near Highway 6.

Gryder’s wife, Debbie, is a retired HPD officer. His son, Austin, is on patrol for the department.