Women in the Houston Police Department have come a long way since 1918. It was during that year when the city and HPD hired Eva Jane Bacher as the first female police officer in history.

Documentation from the Houston Police Museum tells us that positions for women in the Department “had been of matron and they did not have arrest powers.”

Bacher took her job under these circumstances very, very seriously. She diligently worked the downtown streets, usually finding work and a room for the numerous wayward young homeless women caught up in the often-raunchy atmosphere of the World War I era. Her work resulted in being named the first-ever   female police detective in 1921.

As we learn, she would become a victim of the city’s far less effective civil service laws of those earlier times.

One of the many treasures of the Houston Police Museum is the written accounts of Mrs. Bacher’s everyday activities. in her earliest days on assignment in downtown when it was a series of cheap theaters, dance halls, bars, rooming houses, jitney drivers and brothels. She was required to file weekly reports accounting for her time on duty to Clarence L. Brock, the Superintendent of Police.

Most contained great details, including names, addresses and circumstances. She seemed to work at all hours. Generally, people respectfully addressed her as “Mrs. Bacher” but she often signed off her reports to Brock quite simply as “Policewoman.”

A review of her reports shows that she dedicated her duty time to helping people in every way possible, often going far beyond the normal course of police work.

“From 9 p.m. until 10:30 p.m. I talked to night telephone girls,” she wrote in one report. “I found they had been annoyed on numerous occasions by men loitering around waiting for them. I have promised them my protection.”

Bacher went on to write, “I found about 15 soldiers waiting on the outside of the telephone office, they did not molest the girls.”

Bacher carried herself as  a confrontational and judgmental activist, with a social worker side. An example from her reports from the early 1920s:

The man took her to her workplace, where she became hysterical from the drug and was taken home. Bacher’s report offered no further specifics.

Her mother summoned Bacher because she didn’t know what to do. “She did not know what took place after she became unconscious,” the policewoman said. “I took her to Dr. Bell Eskridge, who examined her, and found her to be a virgin, but mentally deficient.”

Bacher regularly admonished couples in the downtown theaters for flirting in the dark, filed charges against couples “for fornicating” and made sure women of questionable virtue – and there were quite a number back then – were not only arrested but examined at “the government clinic.”

Desperate soldiers grew to respect Bacher and, the record shows, on March 20, 1918, two prostitutes who “were responsible for giving soldiers at Waco venereal diseases. One confessed to having syphilis.“

“I took both girls to the clinic for treatment; they were fined $15 each and told to leave town. They were held in the city jail for communication from their people to get money to pay their fine and leave town,” Bacher said. 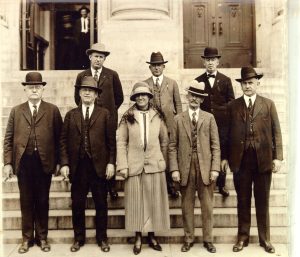 She once ran 15 girls to the clinic and found that 14 were carrying one type of venereal disease or another.

Over time, Mrs. Bacher, the Policewoman, gained deep respect on her special downtown beat. Her reports to the police superintendent back up this evaluation.

“I called at the home of Clarice Whelcher, corner of Dowling and Preston, and talked to the mother of this 16-year-old girl,” she reported. “The mother told me if the girl did not behave herself and mind her she would put her in my charge.”

Her “picture show” patrols thwarted many soldiers, whom she often found asleep in the darkened movie houses. She would sit down a few rows behind them. “Soon after I went in he commenced to groan and curse as if he was fighting someone. I quickly went over to him, put my head on his shoulder and asked him what was the matter”.

“He commenced to curse me, so I called another soldier across the aisle to come and help me get him out. I told the soldier who I was – he talked to the drunken soldier”.

“Come on pal,” the first solider said to the drunken one, “Let’s get out of here, this lady is an officer and you must do as she says.”

On another typical occasion, “I talked to Mr. and Mrs. Boremon over the telephone. Mr. Boreman beat his wife. I told him to leave the house and both report at my office Monday at 9:30 a.m.”

Bacher’s reports are thickly laden with the common lingo of the day. For example: “Attended to my office work in the forenoon, visited picture shows and spoke to two couples who were altogether too spooney.”

In theater darkness she was always finding “couples spooning” or “a couple all spooned-up together.”

(“Spooning” is a now-archaic term used for “smooching” or “making out” usually in darkened locations, particularly theaters. It was a term that must have been common in police reports during the 1920s era).

Confronted with a situation involving a young woman who had on three dresses and “a hat   side in the front,” Bacher tried to coax her to the police station. Eventually, she “swore out a lunacy charge on information.”

Eva Jane Bacher always followed up every detail in every case. When she found a job at Foleys Brothers for a homeless young woman and got her a room at motherly Mrs. Armstrong’s place on Fannin, she soon visited both the workplace and new home to find out how things were going.

Another entry said: “Talked to the girls on the streets, and told them where to go to get work – they say they cannot get work – I have places for 15 or 20 girls.  There is lots of work here for girls, and that is not excuse – no girl needs to be idle.”

She got prompt attention to her judgment calls on the beat, too. When she found the Dixie Theater on Main Street to be “a very unsanitary place, dirty, no ventilation,” she reported the place to city health officers.

They in turn promptly paid the place a visit and required a total upgrade of the ventilation system. The theater “aired out” during off hours.

And what of Eva Jane Bacher’s successors?

And what happened to Houston’s first policewoman?

A new mayor took office in the early 1920s. In firing Bacher, he cited catchall civil service Rule “Y.” That For the Good of the Service” was a catchall clause used repeatedly for political reasons from 1922 to 1947. Mayors often used it to remove or demote officers who didn’t openly support them during election campaigns.

The Houston Police Officers Association (now HPOU) was constituted in 1945 and made civil service job protection its highest priority. In 1947, the Texas Legislature passed the law that established that protection.

Since then, no mayor has been able to fire a Houston police officer based on his or her own political whim.