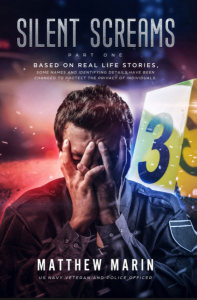 From Day 1 in his HPD career Officer Matthew Marin began to experience the high stress resulting from the trauma of “just doing my job.”

Marin, now an often-honored senior police officer, plucked the details of this first-day event and numerous others that are accounted for in his personal journals over his 13 years protecting the citizens of the Bayou City.

Now those more elaborate but expressly frank reports are on the easy-reading 189 pages of Silent Screams, his memoir about beginning on patrol and eventually suffering from Post-Traumatic Stress Disorder (PTSD).

SPO Marin is going down as an ardent crusader to get help from the disorder. In this issue of the Badge & Gun, please note another article with details on how to get the help you need if you are suffering from PTSD, which often affects first responders and military personnel.

The book sells for $15.99 on Amazon.com ($9.99 for the Kindle version). Please note that $2 of the proceeds will go to the Birdwell Foundation (see enclosed story).

Now, as to that first day on the job. The rookie Marin was the son of now-retired HPD Sgt. Fernando Marin, who had lots of friends on the force in the younger Marin’s rookie season. One of them was another now-retired Sgt. Paul Ogden, also one of the most active and influential HPOU board members in recent history.

Matt Marin was no sooner answering his first roll call that Ogden told him to get in the patrol car to go in hot pursuit of a suspect racing his dad’s pickup away from officers. The suspect was wanted for sexual assault and had been under surveillance. Sure, the rookie Marin had already experienced stressful events in his earlier Navy career, but he would later recount his first HPD experience as “an early warning sign” that PTSD loomed ahead.

HPD officers chased the suspect until his truck crashed after an officer succeeded in throwing out spikes that blew out the front tire. Then he did what many suspects do in this circumstance – he ran! He also drew fire when he continued to aim his pistol at the officers in pursuit. Marin did not fire his gun since he was behind the colleagues who were doing the shooting.

Then came the new officer’s first lesson in Saran Wrap. The suspect continuously aimed his pistol at the officers, who continued their own burst of fire. Ultimately, the man was filled with 13 bullet holes and lying prone in front of a house. Ogden directed Marin to knock on nearby doors to find something to stop the massive bloodletting.

Marin found a neighbor with Saran Wrap. He proceeded to wrap the suspect as if he were leftovers bound for the refrigerator. The move likely wound up saving the guy’s life, for after numerous surgeries he regained the use of his legs and arms.

Time for the rookie to breathe? No!

Three days later – short of ending his first work week at Eastside, Marin and his partner confronted a crazed suspect with his mother in an apartment. He armed himself with two large knives. When the crazed suspect came at Marin’s partner with the knives, the officer prepared to shoot him.

But the suspect’s mother stood between the two men, which, in the final analysis, saved her son’s life. The violent scene saw Marin use his Taser for the first time, seeing the suspect react to the effects by logrolling across the floor, disengaging the Taser wires. The knife-bearing individual rolled himself under a bed and wrapped his legs around the legs of the bed. A sergeant at the scene finally “got fed up” and ordered Marin to dry tase the man, finally ending the violent confrontation.

It was all in a first week’s work.

It was the start of a policing career that saw more than its share of traumatic events during the first two years of Marin’s HPD career.

In hindsight, these first two events had lots of what-ifs. What if the police chase suspect had gotten off deadly shots? What if the crazed son had stabbed Marin or his partner?

As is common in the Monday morning quarterbacking of police work, the question crops up: What if things had turned out differently?

Marin asks – and answers – this same question about other policing situations in which he found himself. An HPD life-saving award winner, he goes into special detail about “the first time I had to kill someone.” It is covered in the accompanying B&G article that includes a large portion of a chapter in Marin’s book.

After that traumatic episode – in only his first couple of years with the department – Marin was instructed to go through therapy with HPD Psych Services counselors.

He sees the problem that became the primary cause of his own PTSD. He shot the suspect to death and couldn’t believe what was happening in the aftermath at the scene.

“It’s the reason I wrote about that (event),” Marin said in an interview. “I was hoping people would understand that officers are affected deeply by what they have to do.

“And what affects officers also affects their health, mentally and physically.

“I was shaking after I pulled the trigger. I was embarrassed about shaking so much for so long. I didn’t want other officers to see weakness. In my head I didn’t want them to look at me as if I was weak.

“That night, I took a shower. I visualized blood coming out of the shower instead of water. The scene was so bloody. I had blood all over my boots because when I shot him, he was so close to me. He was the first person I had to kill.”

“After that shooting I started drinking a lot to self-medicate. I blacked out one night. When I woke up, I was on the couch with whiskey in one hand and my pistol in the other.

“I don’t remember what I was thinking. What the (expletive) was I thinking?”

He had created the worst possible environment for his condition. He was single, lived alone in a quiet apartment. When he says alone, he means “you’re alone with your thoughts all day.”

In his workplace he seemed normal – except for being almost constantly late for duty because he had trouble sleeping every night and – when he finally drifted off – he had trouble getting up and getting dressed for duty. It resulted in lots of complaints on his record.

He recounted what happened:

“They made me start therapy the first three days after the shooting. I went and also stayed in there a month and got fed up with it because in my head I was so messed up there was no way a counselor could understand my feeling.

“I started self-medicating again. I was womanizing. It was like an addiction to just keep my mind off what I was replaying in my head.

“This led to not sleeping at all. I started crashing out, was late for meetings and court appearances. I was unable to sleep but when I did sleep, I crashed hard. The department came down on me hard. I had 15 or 16 complaints against me. I was under watch on the job for a long time, for a certain amount of months. I would either be fired or go back on patrol.

“My problem wasn’t on the street. My issue was administrative stuff. I was late, missing a court date, that kinda stuff.

“I didn’t know what PTSD was. I got tired of doing what I was doing. I was getting deeper and deeper in trouble. I was diagnosed with PTSD. I researched it and started writing down all my stories. I had a lot of stuff already written.

“I had a lot of friends kill themselves,” he said, referring to fellow HPD officers. “I could kill myself.

And his defining statement:

“I was tired of seeing people die.”

And Marin is not talking about suspects shot and killed by police officers who are doing their duty. No, he’s referring to his fellow officers who become so deeply depressed by the trauma they endure while doing their job that they take their own life.

Matt Marin wants his fellow officers to better understand PTSD and know that there is plenty of help if they are going through it and might not yet realize it.

That’s why he expanded his long-time practice of journaling and turned it into a memoir designed to be frank about his problem.

More than 30 reviewers on Amazon.com have posted positive reviews. Marin wants his fellow officers – in HPD and everywhere else – to give it their own review. He said it may help them discover that PTSD is present in their lives.