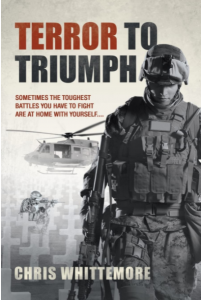 She was just a little girl, innocent in her growing-up years but seemingly aware that the six American Marines – snipers, they were called on duty – were there to help them react to the evil outfit known as the Taliban.

Chris Whittemore was one of the six in the house owned by an Iraqi devoted to the military protectors. He had three wives and a few kids. One of them, the girl, was all of 8 years old and reacted positively to the strangers who were to stay in her home for three days.

One-night Whittemore was on watch and had to smile when the little girl came out of her room and sat on a chair covered in a blanket with her stuffed animals. She ended up sleeping through the night as the Americans kept a sharp eye out for the enemy.

Whittemore, author of a book about PTSD entitled Terror to Triumph, told the story by starting with the intro: “I saw the carnage that most combat veterans are going to see.”

But wait! He was describing what seemed to be a peaceful moment with a family – a brave family that had opened its home to the guardians of peace and democracy. There was no carnage – was there?

Four or five weeks later Whittemore and his fellow snipers returned to the town and went back to the house. Things had changed significantly, violently.

“It was super dark,” he recalled with dread. “The guy meets us in doorway of his room. He spoke pretty good English. We expected to find the family members like they were before. But there was only one wife, and the guy was limping.

“Where’s the other family members?” one of the Marines asked.

The answer was horrifying.

The Taliban found out that the Marine snipers had been quartered with the family and that they had killed some of Taliban members from this residence.

The Taliban killed one of the wives. They beat the man of the house, probably breaking his leg. Whittemore reasoned that the medical treatment was lacking and, thus, the limp would probably be permanent.

“Where is your little girl, the 8-year-old with the stuffed animals and blanket?” Whittemore asked.

The answer was branded into his brain: They took the little girl and shot her in front of the entire neighborhood to her an example.

“We were devastated,” Whittemore recalled of the incident about 13-15 years ago. “We were responsible for getting an 8-year-old girl killed.

“There are lots of stories like that in the book.”

Marines are like police officers – they do super jobs no one else can or will do – but they aren’t super-human. They are as regular as everybody else dedicated to doing a job. The endurance of the trauma involved is quite another thing. The realization of this process is a key to recovering from PTSD.

In an interview, Whittemore – now retired on a medical discharge – also reflected on another violent chaos. The U.S. introduced democracy to Iraq and used Marines to participate in the creation of an Iraqi army. Our troops and civilian advisors also drew the tireless chore of introducing democratic principles to the people.

“One of the first things we did,” he explained, “we had the city’s first election. We had the Iraqi military to protect their own country.

“Seventy-five signed up to join the military to protect their city. There was the ‘glass factory’ which was used to make all the glass windows for the buildings in the city.” The structure was converted to a military headquarters of sorts. Whittemore and his fellow Marines were off those premises in the process of getting something to eat when the order came.

“Get your gear and go to the glass factory!” the Marines were ordered. A suicide bomber set himself off. Seventy-five were killed along with seven U. S. officers. This meant each of the recently recruited Iraqi soldiers were dead.

“We were told to get black trash bags and shovels. We were the clean-up crew. We separated what was left of the men and loaded them in plastic trash bags like collecting leaves.

“We were doing stuff like that. At the time I clearly should have been affected, seeing that stuff and the little girl.”

Whittemore did multiple tours of duty in Iraq. At one point he “retired” and became a state trooper, only to become bored with writing tickets and clearing wrecks. So, he reentered the Marine Corps.

This was no surprise. He hailed from a rock-solid military family with law enforcement connections linking the limbs of the family tree.

Whittemore was born and raised as “a military brat who moved a whole bunch of times.” His grandfather was a Silver Star recipient for actions he took at Pearl Harbor on Dec. 7, 1941. His father and all of his uncles were servicemen (all but one in the Army; the one in the Navy) who served in duty stations like Vietnam.

Whittemore joined the Marines in 1995. Four years later he met his wife, Christina (“Tina”), the daughter of a Vietnam War era Marine, Tom Cotton of Clear Lake City. Tom and his wife Diana also produced another daughter, Ginger, who is a Navy veteran. It turns out Whittemore and his father-in-law were stationed at the same military base in Hawaii, a generation apart, of course.

The connections don’t end there. Ginger is married to HPD Senior Police Officer Chad Curtis, a 21-year veteran now assigned to the Planning and Data Governance Division. Curtis and his brother-in-law the author have both been recruiters – Chad for HPD cadets, Chris for the Marines. Whittemore and Tina reside in San Antonio.

“I can tell you he’s a go-getter,” Curtis said of Whittemore. “I think he was promoted to E-6 and did three, four, five tours (in Iraq), somewhere in there. We was a sniper for a while and then went to the air wing. Then he went into recruiting.

“He was doing very well, the top producing recruiter. He was transferred to being the NCO in charge of the recruiting station. Shortly after that his PTSD was getting bad. From there he was being seen by the doctors at Fort Sam Houston Army Medical Center for the last six months before his medical discharge.”

This family calling (military service and policing) knows no limits. On Veteran’s Day In 2018, Cotton, the Marine and one of Texas’ most notable sports memorabilia collectors, was called on to read 30 names off the Vietnam Memorial. He knew two of them who were his fellow Marines.

Whittemore’s story has many similarities to that of Senior Police Officer Matt Marin, whose PTSD memoir is aptly covered in this issue. Marin, also a Navy veteran, emphasizes the policing experiences, while Whittemore takes on dealing with the traumatic military experiences.

Both accounts are important to report to the American citizens who are seeing a growing number of PTSD cases and their often-tragic aftermaths.

What happened to Whittemore the Marine?

Interestingly, he did the same thing SPO Marin did – he got into therapy, had a bad attitude, dropped out, but then returned and improved!

You see, this “military brat” never wanted to shy away from the battlefields on the other side of the world. He still wanted to get those enemies of the same ilk as those who killed that 8-year-old girl.

“If you’re a problem, you’re not going to deploy,” Whittemore explained. “After my ’07 deployment I was told, ‘You have to get help. You have to do something. Let’s get you set up with a therapist in town.’ “

That town was Twenty-Nine Palms, California, with a population of nearly 30,000, mostly Marines and their families.

He had a familiar story: “If I slept, I had to drink myself to sleep. I would go to work then come home and drink until I could sleep.”

The first therapist didn’t work out. The binge drinking continued.

“A couple of months later my wife convinced me to go on base and talk to somebody during a heavy spike of suicides in the military. I came to realize to either get help or my career was over.”

Whittemore wanted to deploy as a gunner on a helicopter. He faced a critical dilemma: When he underwent the medical flight physical, he got good news and bad news. He could continue his PTSD meds and not be deployed or stay off them for a year and be ready for duty.

“I wanted to leave them off,” he recalled. “My wife said absolutely not. I quit for a year. It was stupid in hindsight. They (the meds) were actually helping. I was young and dump. I wanted to deploy.”

Well, the nightmares, the drinking — “the intrusive memories” – returned in spades.

The lesson: get therapy and stay with it. Whittemore did and he survived – “deployed” to write a book that already is a best seller like Marin’s on Amazon.com.