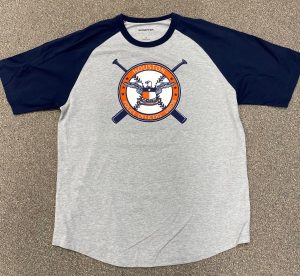 **UPDATE: HPOU was able to order more shirts!  Due to the vendor’s limited stock, there will only be approximately 200 shirts.  Please, watch for any upcoming eblasts!

Never let it be said that HPOU is not T-shirt strong.

HPOU’s Lisa Marino said the e-blast announcing the sale of the shirts was issued at 3 p.m. one afternoon and sold out at 10 a.m. the next day. “We should have ordered more,” Marino said. “But finding shirts fast enough proved to be a big challenge.”

The shirts were the idea of HPOU Board Member Terry Siegler and were designed over the weekend before the World Series began at Minute Maid Park. They sold for only $10, a  bargain in today’s market.