His wife put down the phone to answer the door. A well-dressed young man was calling, and she opened the door to hear him out. Suddenly, without warning, the man and two others knocked the door into the woman’s face!

They tied her up and methodically took everything of value in the home that was the object of their well-planned terroristic act.

The friend at the other end of the telephone heard what was going on and called police.

It was too late by the time HPD arrived. Everything was lost and the bad guys got away and were never caught. Fischer’s wife never wanted to spend another night at the couple’s home.

A Houston businessman for 45 years, Fischer owns Bowgene Fluidics Inc., which fabricates materials used in drugs and cosmetics. “We make the equipment that makes the drugs,” he said. In such a business he is no stranger to design and fabrication.

Given this background, he has organized Ground Force Security Inc., which markets the invention inspired by the long-ago home invasion.

Fischer reasoned that deadbolt locks, cameras and security alarms were no defense against a typical home invasion in which the invader(s) could knock their way through the door and sack up valuables inside five or 10 minutes.

He uses a round rubber-laden metal device placed inside a specially designed floor connection that holds the ground force device right up against your front door, your back door – or both.

An unwanted would-be entrant would not be able to come in if the device were in place.

As Fischer explained, “You put it in and you take it out. It goes into the floor. It takes 8,000 pounds of force to break in. This is used as a barrier connected to the floor rather than a door connected to a frame with screws.”

He pointed out that there are no mechanisms, electronic or otherwise, that could possibly malfunction.

Fischer had motivation: no one will force their way inside his house with the Ground Force device in place. He offers the same protection to his customers.

All you have to do is use the proper tools to drill a hole in the floor adjacent to the threshold of your home. He recommends the appropriate model for each of the doors of your home.

There are three different models with a fourth about to earn a patent.

Those three models are:

FULL FORCE – Model 201, the so-called “Flagship Model” of Fischer’s business. It can be used “only in a singular mode either up against the door or set back from the door to allow the door to be slightly opened.”

DELTA FORCE – Model D-201.This version has more versatility. It can be used “in a dual mode set back from the door to allow the door to be slightly opened. This model allows the unit to sit up against the door simply by adding an additional bolster unit to the Full Force model.

TASK FORCE – Model T-201. This model has the same functional characteristics as the Full Force and the Delta Force. But it is designed to accommodate a double door entry system.

Fischer spoke with confidence – as if communicating to law enforcement officers who must deal with break-in cases on a regular basis.

“The crooks are not getting in! Ground Force will impede them from breaking into your home!” the inventor asserted.

His website provides even greater details. Go to groundforceinc.com for more details, including a video of the inventor briefing his viewers about the simplicity and effectiveness of his products.

Fischer has a fourth model that was on the verge of being patented and ready for consumers as he detailed his “ground forces” to the Badge & Gun.

It will apply to external doors “that swing out instead of swing in like the doors in a home,” he explained. These doors are common in businesses and schools. This newly developed device will, for example, enable teachers to bar the classroom door to an active shooter.

To be known as X FORCE, the fourth device on the Fischer menu will connect to the door “once it’s goes into the floor.”

You can order any of these devices off Fischer’s website, which contains detailed information, including the prices.

“I believe there will be a genuine interest by HPD officers to acquire these for their homes,” Fischer said. “I believe it likely that officers’ homes are likely targets for home invasions because officers typically own many guns and home invaders want guns.”

He said prices range from $97 up to $128 and made it clear that if anyone wants installation service that that would amount to about $40 per device.

Fischer said he will offer HPD officers at 10 percent discount. 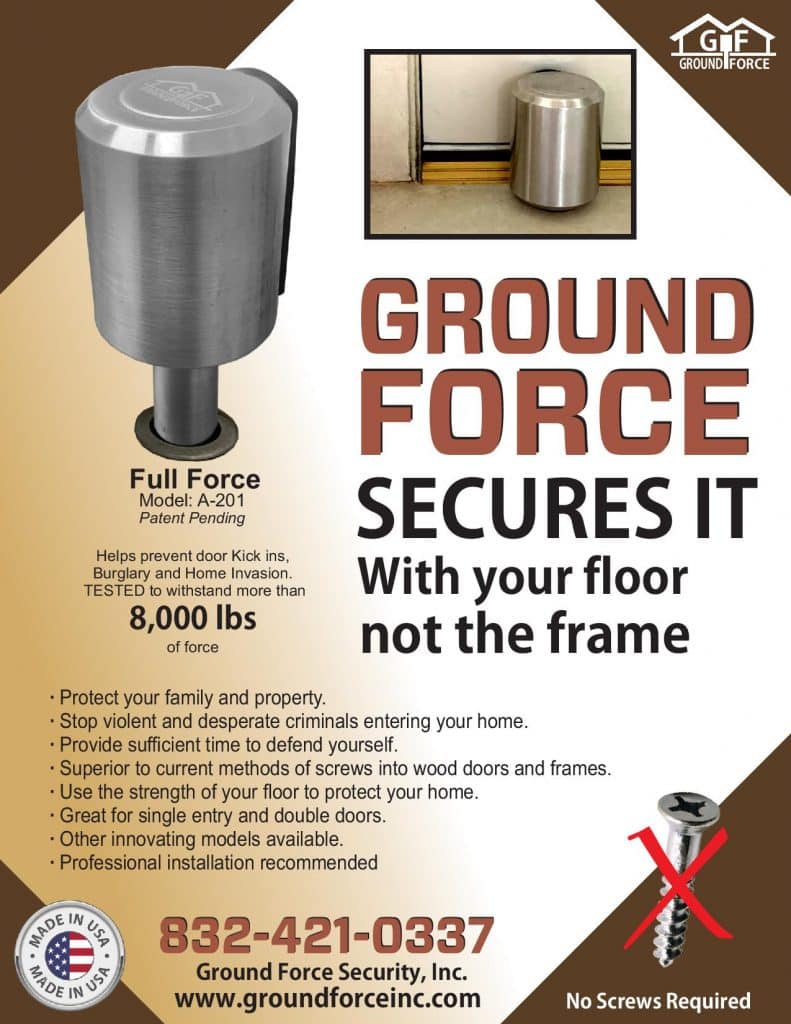