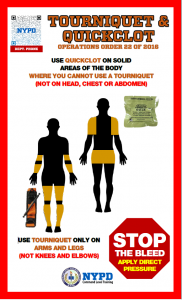 The Badge & Gun has been trying to prove that HPD has the best trained officers in the nation.

There is, however, a temporal aspect to this study. For example, Chicago was ramping up a four-year plan that would start in 2018 and increase training hours per year until they reached 40 hours by 2021, superseding both Philadelphia’s 38 hour and Houston’s 32-hour mandates.

Furthermore, the B&G recently learned from a Philadelphia training officer that their 38-hour mandate  went into effect only a short time prior to Miller’s 2017 study. As many of our readers know, HPD required 40 annual hours of training for years, if not decades, until about 2016 when it lowered the requirement to 32 hours.

Overall, HPD’s training approach looks good in comparison to the other big city departments; however, we couldn’t let the desire to be competitive with other departmental training approaches remain as our lone thesis. It would be an error in judgment, and it would miss the better point regarding the value of in-service Training.

“We don’t view training in terms of hours per year,” Zinstein Told the Badge & Gun.

But we persuaded him to give it the best shot for an hourly translation of the training procedures that are routine in perhaps what is the world’s largest municipal law enforcement agency.

(In 2017, at the time of the Miller study, NYPD had 36,000 officers. However, today that number is down to 32,000, Zinstein said, venturing to cite the current prevailing negative view of police officers in general has contributed to the large drop-off.)

To begin with, NYPD requires its officers to spend four days a year either on the shooting range for requalification as well as in the classroom to get boned up on new laws and tactics.

To continue emphasizing the apple-to-orange comparison, Zinstein pointed out that New York officers are required to put in eight-and-a-half-hour workdays. This means that our 32 hours (orange) actually amount to 34 (apple) in New York, using the same hourly formula.

Because of events like the George Floyd incident in Minneapolis, many American police departments are required to put officers through at least eight hours of ABLE training. ABLE stands for Active bystandership in Law Enforcement, a training curriculum developed at Georgetown University.

While HPD has no ABLE requirement for its officers per se, the 2020-2022 Tactical and Public Interactions mandatory course does cover the Crew Resource Management Model (CRM). While CRM was created by the aviation industry, the ABLE model presents the same concept, only geared specifically toward the law enforcement objectives.

Here we come to a tricky part of the training equation. Zinstein designed a curriculum that requires the sergeants at the Big Apple’s 160 patrol stations to conduct 15-minute training sessions at every daily roll

call. When first implemented, there was no accountability – some sergeants conducted the sessions, others did not.

Zinstein said that has changed. There is a commander over training and the sergeants are held strictly accountable, he said.

But let’s do the math if we are to count this requirement in the in-service training officers are required to accumulate each year. Zinstein said they should definitely be part of the training equation.

These sessions amount to 75 minutes per week times an average work year of 48 weeks. That’s 3,600 minutes or 60 hours. This means – in theory, mind you – that the largest department in the U. S. requires the equivalent of almost three weeks of in-service training.

At this point in this in-service training comparison, you might be asking how the sergeants keep the attention of their rollcall officers for 15 minutes. Zinstein worked diligently on this issue, having been a patrol officer in earlier years. He said he knows that officers are anxious to get on the job and might not be paying much attention. 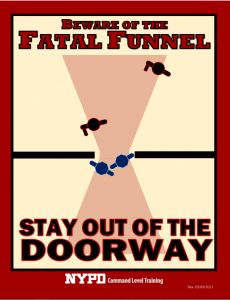 “I use what I call the ‘billboard approach’ in these presentations,” he explained. “Billboards have a minimum amount of text. You see them on the side of freeways and they usually get a message across that’s easy to remember. What we use are known as training flyers.

“We use a training flyer on a frequent basis. Each one of them communicates a tactical message or a change in policy.”

He provided us with two examples: the Tourniquet Quickclot and Beware of the Fatal Funnel. We have reprinted them here so you get the idea.

The sergeant was adamant about the Big Apple training philosophy comparison to the Houston Orange. He said NYPD “patrol” is divided into three commands – patrol (the streets), housing (low-income residences) and transit (subways, etc.) Each of these bureaus has its own unique training needs. At any given time, the department may designate officers for special in-service training as circumstances, laws and tactics change. Zinstein said these training sessions can last at least one day and sometimes more.

He said that NYPD also is developing its own version of a “neighborhood-oriented policing” training session.

As any HPD officer knows, training in that realm began in Houston and HPD as early as 1983 when Lee Brown was named the city’s police chief. Before he became mayor, Brown was the New York police commissioner.

Officer Miller has been working as an in-service training coordinator at the Houston Training Academy since early 2017. He has written the new Lesson Plan Development Manual which directs trainers on how to write and package their curriculua. He is no stranger to the logistical challenges in-service training brings to any organization.

“My heart goes out to Sgt. Zinstein,” Miller said. “Coordinating training for 32,000 officers must be a magnificent challenge. This is why it is so hard to compare us to them.

“While I think there is a great advantage to in-class and hands-on training, when facing the logistical challenge of training that many officers, a quick ‘billboard’ training flyer will go a long way. Indeed, with the COVID Pandemic, we learned the same lesson.

“We too are moving toward remote learning via Video On Demand (VOD) classes offered in TMS. This of course brings challenges just like Sgt. Zinstein faces with the 15-minute rollcall training sessions.”

“While both HPD and NYPD have a method of accountability, such as digitally tracking video views in TMS, no one is actually with the officers while they are ‘viewing’ the video. NYPD’s Accountability Commander cannot be in every 160 rollcall rooms two or three times a day.

“This allows officers to minimize the video window while they do actual police work. Likewise, it allows some NYPD station training sergeants to place more emphasis on getting to work as opposed to the 15-minute training session. This accountability issue is not about officers being lazy or wanting to cheat on training, but rather it derives from the balance between training and operations.

“Officers are vastly type A personalities and like to get to work. So, if they’re training, they are not answering calls for service or investigating crime, and this makes training seem like a distraction from duty. The battle between operations and training is a long-lived conflict seen in many industries. But it is especially present in law enforcement, where the number of officers actively working the streets can be a matter of life or death.”

Miller said, “Eight hours in a classroom may be a drag, but it allows the instructor and the officers to dive deeper into important subjects. Sgt. Zinstein’s 15-minute presentations must focuse on very specific stand-alone details. Even our VODs must be re-engineered to deliver content in 15-to-30-minute blocks. The advantage VODs have, as compared to NYPD’s live presentations, is each block can build on the previous.

“A 15-minute presentation must lack in that building design because, due to days off and shift requirements, not all officers will be present on the same days. Thus, any attempt to make a comprehensive training program will require officers to be presented with repeated information.

“This is not to say that there is no advantage to the 15-minute sessions. As described herewith, it leads to many hours of training over the year and it is a great way to quickly remind officers of the most important ideas they should consider every day.”

Now let’s get to the bottom line.

“When I talk about this issue in the Tactical and Public Interactions class,” Miller explained. “my point is that in-service training is important. While it is hard to directly measure the positive outcomes of training, we can surely demonstrate a historical correlation between continuing law enforcement training and positive community outcomes.

“And I think we can even show a causation between positive community outcomes and officer safety. The better we, as police officers, know how to interact with those we swore to serve and protect, the safer we will be in doing so.”