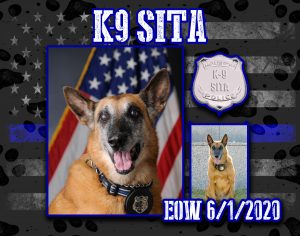 Sita, the HPD Narcotics K9 officer generally known as “the best dog ever,” will be the subject of a special celebration of life at the Breck Porter Building – aka the Meeting Hall at the HPOU at 11 a.m. on Nov. 20.

Sita wasn’t just any K9. There will be plenty of evidence at the memorial service to prove the fact. Sita challenge coins will be sold for $10 and Sita face masks for $25 – all benefitting the K9 division of the Assist the Officer Foundation.

Sita, who literally spent her life on the force as a Narcotics K9, also might prove to be the inspiration for a new Life Flight service to rescue K9 officers injured in the line of duty.

Among the speakers at the luncheon program will be Rudy Cabrera, the chief nurse of Life Flight operations. Sources say it’s a safe bet that Cabrera will announce that the great life-saving helicopter service will be enhanced to include a procedure for the rescue of four-legged K9 officers injured in the line of duty.

Sita’s partner, Narcotics Officer and K9 handler Kristin Uhlin, said such an enhancement could work with Life Flight transporting the injured K9 to a specially designated veterinarian much like human officers are transported to Memorial-Hermann.

Uhlin will speak along with retired Officer Gary Doyle, who spent 30 years of his HPD tenure working with K9s, and Sgt. Mike Perales, the current Narcotics  K9 sergeant.

Sita will be the second HPD K9 to be the honoree at a memorial ceremony. Sita was euthanized and cremated on June 1 after suffering a possible seizure that morning.   She was eight days short of her 15th birthday, making her the oldest HPD K9.

It can truly be said she was practically born into the HPD Narcotics Division. It was the only job she knew. At one juncture last year, she was credited with some statistics that would befit a Hall of Fame career: From September 2007 until now, she seized more than $46 million in estimated value of narcotics and more than $6 million in currency seized.

Uhlin said Sita’s death prompted an outpouring of gifts and special memorials. They included funding for the production of the coins and facemasks by an anonymous donor.

Many of these special mementos will be on display at the ceremony. 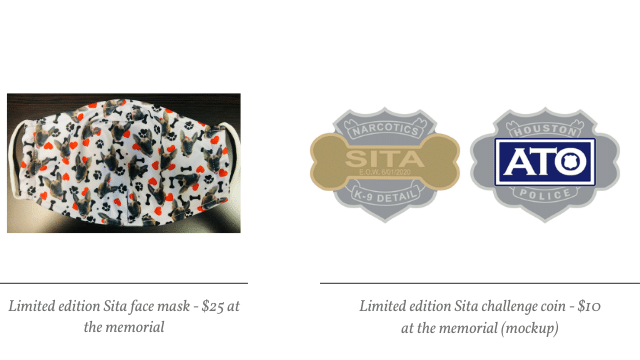