Congratulations to Senior Officer Tim Whitaker who was presented the 28th Annual HCPAAA Lynn Clooney Officer of the Year Award at the May HPOU general membership meeting.

(HPD Chaplain Vincent Johnson was the recipient of last year’s award, which was not presented in an HPOU general membership meeting due to COVID restrictions).

Officer Whitaker is an exemplary police officer who demonstrates tremendous compassion for his profession, community and fellow officers. He began his career with the

During his career Tim has earned a great reputation as a police officer and was selected to become a field trainer and evaluator. This is a great honor for a patrol officer to be trusted with training the future generation of police officers.

Officer Whitaker embraced this new responsibility and spent the next 24 years training and evaluating more than 200 probationary police officers. During his time at Westside he was continuously elected to serve as an Employee Representative Council (ERC) representative.

After 33 years on patrol, this officer transitioned to the Community Service/DRT Unit. This position requires the officer to attend many speaking engagements and he always represent the department to the highest degree of professionalism.

However, there are other duties and responsibilities with this position. This officer organizes the division’s Police and Clergy Alliance, the Positive Interaction Programs, attends all Super Neighborhood meetings for the Westside Division, and is responsible for the Blue Santa event, where children from three elementary schools in the area are given holiday gifts that they may not otherwise receive.

Officer Whitaker’s efforts and contributions to the law enforcement profession have not stopped with his regularly assigned duties. In 2012, he was appointed to a vacant Houston Police Officers Union (HPOU) Board seat that he held until becoming 2nd vice president in 2020.

In addition, he is the President of Houston Officers Peer Assistance (HOPA), the Union’s peer support entity. He also is chairman of the Line of Duty Death Committee and is on the board of directors for Assist the Officer.

And if this were not enough responsibility, he also currently serves on the department’s Crash Review Committee, which ensures police vehicle crashes are thoroughly investigated and discipline is equitably recommended for at-fault accidents.

Officer Whitaker was appointed to the Texas Commission on Law Enforcement by Gov. Greg Abbott in 2017.  He has received numerous commendations throughout his career, including Assistant Chief, supervisor, citizen letters and other city employee commendations.

In 2019, he received the 1st Annual Blue Badge Award, which is the Houston Police Family Support Unit’s Officer of the Year Award.

Whitaker is actively involved with his church, not only does he participate in the services and youth groups, but also coordinates the church’s security team.

His contributions to the Houston Police Department, City of Houston and the law enforcement profession are enormous.  As a result of tireless dedication throughout his career, he was an obvious choice to receive this year’s Lynn Clooney Award.

We would also like to congratulate the following officers who were also nominated for the Lynn Clooney Award by their superiors: 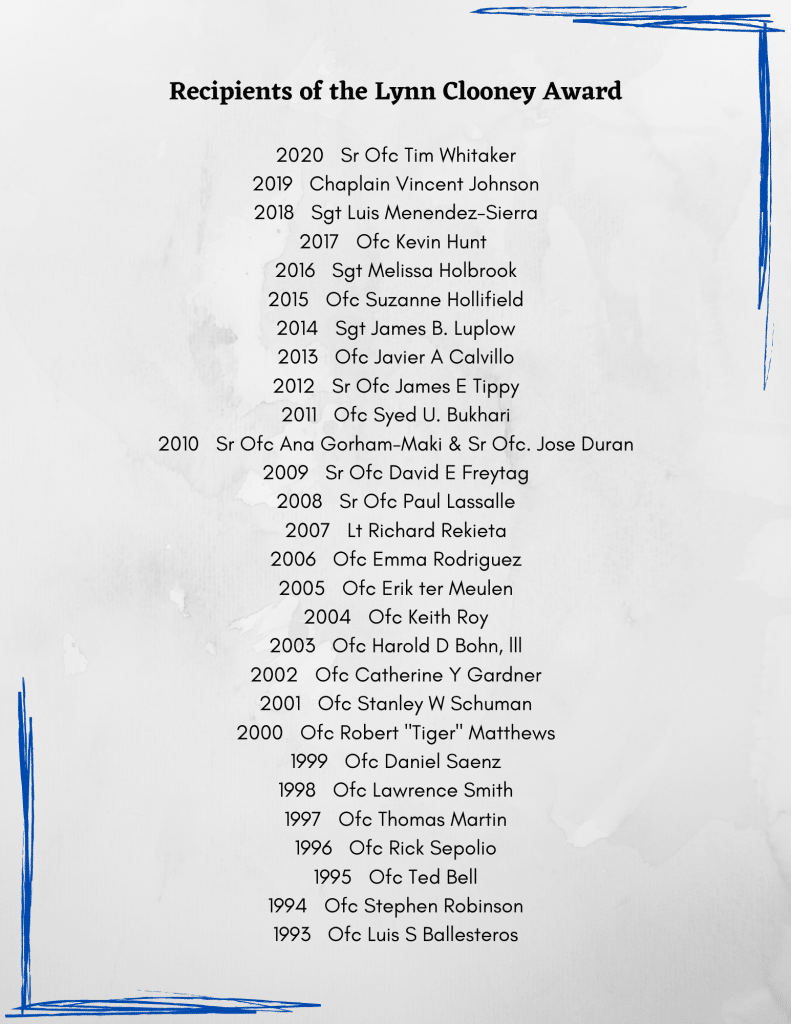 Schmauss is a devoted member of the HCPAAA and a popular supporter of the HPOU and all Houston police officers.