The personal sacrifices made by members of the armed forces cannot be overestimated.  At Dignity Memorial®, we deeply appreciate those who have served our country with courage and selflessness.  Dignity Memorial® providers are honored to do our part in turn by caring for military veterans and their families.  Military funeral honors are a dignified ceremony and final demonstration of deep gratitude to those who have faithfully defended our country.  Dignity Memorial® professionals are privileged to coordinate the military funeral honors ceremony befitting of your loved one’s service to the United States. Whether your loved one is buried in a VA national cemetery, a state veterans cemetery or a private cemetery, we ensure that all veterans receive the military funeral honors they are entitled to.

U.S. law mandates the rendering of military funeral honors for an eligible veteran, if requested by the

family, at no cost by the Department of Defense. Your local Dignity Memorial provider will help your family request military funeral honors and ensure the following benefits are made available. 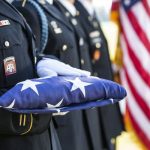 Folding and presentation of the flag

An esteemed military funeral custom, the folding and presentation of the flag is provided to your family

at no cost. All veterans receiving military honors are entitled by law to a minimum of 2 members of the Armed Forces as their honor guard detail. At least one of the honor guard members will be from the veteran’s service branch. The representative of the veteran’s parent service branch will present the flag to the next of kin or, if none is available, a designated friend.

The playing of “Taps” is an emotionally moving and patriotic military funeral tradition. As buglers are

becoming increasingly rare, a ceremonial bugle may be used in lieu of a live performance of “Taps.” Ahigh quality recording of “Taps” performed at Arlington National Cemetery during a service was made and is discreetly hidden in the bell part of a bugle. The service member holds the ceremonial bugle as though being played. This tool offers both the image and beautiful rendition of “Taps” being performed in honor of the veteran. If preferred, Dignity Memorial professionals are happy to assist in locating a local musician to perform “Taps.”

discharged under other than dishonorable conditions

If your loved one is qualified for funeral honors, please notify your Dignity Memorial funeral director that you are interested in having a funeral service complete with military honors. We recommend giving at least 48 hours’ notice, if possible, to give our professionals time to organize the ceremony. 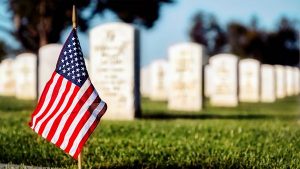 Provision of a headstone or marker

The Veterans Administration will provide a headstone, marker or medallion without cost at the request of the veteran’s family. Dignity Memorial professionals can assist you with this request as well. Please note, although the headstone or marker has no cost, there may be a cost associated with placing the tribute if done in a private cemetery.  Additionally, Dignity Memorial providers offer special benefits and discounts on services and merchandise for veterans.

Plan a memorial fit for a hero

Serving in the military is a badge of honor that deserves recognition.  With no obligation and at no cost to you, we’ll walk you through the details of advanced funeral planning for veterans and help you understand your options. A Dignity Memorial® planning professional can give insight into the many choices you have to fund your plan, as well as burial benefits provided by the U.S Department of Veterans Affairs (VA), allowing you to take control of funeral costs and lock in current prices. From the folding of the flag to the playing of “Taps” and other government benefits, we’ll help you plan a memorial fitting of your loved one’s service to our country.  Contact us today to find out more about the special savings and benefits available to Houston Police Officers’ Union members and their families. Visit www.DignityMemorial.com/HPOU or call 844-502-5901 to get started.