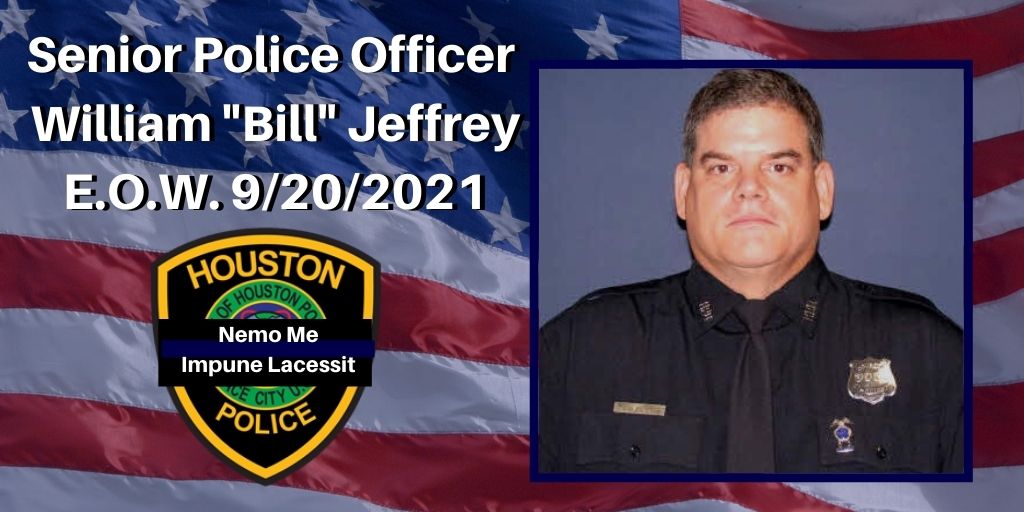 Editor’s Note: The Badge & Gun’s coverage of Senior Police Officer Bill Jeffrey’s celebration of life and its commitment to never forgetting the brave HPD officers who have made the ultimate sacrifice must include the following. It is the eulogy delivered by his best friend, HPD Officer Paul Lowrey.

First of all, I need to tell you that Bill is not dead.  He believed in Jesus Christ as his Savior and embraced John 3:16.

Second of all, I don’t like crowds, hate funerals and detest public speaking.  Bill’s is the only person on the planet I’d do this for…he is probably very pleased that I’m up here squirming.

I knew Bill for over 40 years and considered him my closest friend.  My best friend.  We were a strange pair.  I don’t know if he enjoyed being the center of attention, or that he just WAS the center of attention.  He could take over a room with his laugh and smile.  I always preferred to be toward the back of the crowd and I think until recently, everyone in HPD had forgotten I worked here.  I dunno, they may have thought they fired me, but my check is still coming in like that guy in Office Space.  I guess I’ll find out this week.

Bill and I swore a blood oath to each other.  If something ever happened to the other, the survivor would take care of the other’s family.  We told each other details of how we wanted things to go and Bill was firm that I should not allow a huge funeral.  Susanne and Lacie trumped me on that.  Sorry buddy.  His real desire was to have a Viking funeral, with the raft, men with swords saluting and the flaming arrow.  Apparently, HPD says that permits for that are too difficult to get and that insurance won’t cover it.  Sorry again.  I tried man.

Bill joined HPD back in 1990.  By his 18th month in HPD, Bill was on the SC tactical unit…which was unheard of in those days.  Bill was amazingly quick and fast for a man of his size.  He could chase down the fastest crook, no matter how fast that guy was…Bill just didn’t have any give up in him and would just stay on the guy’s trail and until the crook gave up or exhausted himself.  Bill worked on SC’s TAC team for a long time before going over to Major Offender’s Division and there he worked on a fugitive team, arresting wanted felons.

For God so loved the world that He gave his only begotten Son that whosoever believeth in Him should have everlasting life.

Bill was liked and respected by everyone he worked with.  His work ethic was unparalleled.  Even the guys he arrested respected him as he treated everyone the way Bill wanted to be treated.  And if they wanted a fight, well, he’d give it to them and it wouldn’t end well for the bad guy.  And when the bad guy stopped fighting and gave up, Bill would stop and treat the guy with dignity and respect.

Nick, one of Bill’s old partner’s told me that if he and Bill saw a fugitive out on the street, Bill would pull the car near them, open the door , stare at the guy and raise an eyebrow.  The guy would look around like “who me” and Bill would nod his head…the guy would shrug his shoulders and give up and walk to Bill.

My parents moved my brothers and me to Spring from SE Texas over 40 years ago.  I met Bill for the first time in a football locker room.  My brother, who’s about 10 times tougher than me, was getting ready to fight this tall kid with helmet hair.  I felt the need to jump in between them.  Bill said what is y’alls problem, I said you have to fight me before you fight my brother and my brother said you bumped in to me.  Bill scowled and said well I’m sorry!  We yelled back I’m sorry too.  Bill and I were inseparable after that.

Bill became my fourth brother.  He was always at my house or I was at his.  Both our mother’s grocery bill spiraled out of control.  His mother Pat, loved me like her own and my folks loved Bill like their own son.

Bill and I had a lot of adventures over the years, although they have mellowed with age.  I need to tell you folks that Bill had superpowers.  The first and most powerful of which was the ability to break anything!

I’m pretty sure that Bill broke every stick of good furniture my mother ever had.  He didn’t do it on purpose, he did it because that’s what Bill did.  He was, as Mrs. Nabors put it, a bull in a china cabinet.  He was big, had a lot of energy and didn’t have what we cops call “fender judgement”.

One time my parents were out of town and we may have had a few hundred close friends over…for choir practice and stuff.  Well, a lot of stuff got broken including the kitchen doors and a hole in the wall in the entry hall.  My brother handled the doors and Bill and I considered the hole.  We stared at it and Bill said I can fix it.  I said how.  He said I fix these all the time. (None of you should be shocked).  So he confidently stuffed about 7000 paper towels in the wall and we re-evaluated.  He didn’t look pleased.  Bill grabbed a sheet of newspaper and put it in the hole then grinned triumphantly at me.  Perfect he said.  Bill took some spackling cover the hole, used a wash cloth to match the wall texture and I painted it to match the wall.  The next hour slowly ticked by as the paint dried until Bill declared that we had done a perfect job and my folks would never know.  He grinned smugly.  We were on the couch watching football when my mother entered the house.

She was about a step and a half in when she screamed, “Bill!  Paul!!”.  We ran over and looked as innocent as we could.  She pointed to our “perfect” sheetrock masterpiece and said which one of you galoots (that’s what she called me and Bill when she was mad at us), put a hole in the wall.  We said, “what?”, “there’s a hole in the wall?”, “who did that?”.  I think I was grounded for a month over that, but not from Bill.

I had a house that had one of those 1980 3”, six foot long, galvanized posts cemented with about a yard and a half of concrete, in the back yard.  You know, one of those posts that held the old 5’ satellite dishes that could reach out to the next galaxy.  The new buyer wanted that post gone, so I bought a sledgehammer and worked on it every night after work.  I chipped maybe half an inch of concrete off that week and began to sweat with the closing date coming closer.  I thought to myself I needed an expert.

Call Bill, I thought.  He can break anything!  Bill came over and excitedly looked at my project.  He looked like a six year old at Christmas who got a new bike.  He scowled and said “you’ve been doing it all wrong!”, grabbed the sledge hammer from me and took a baseball swing at the post…and missed…breaking the sledge hammer handle.  Now I knew the dangers of unleashing his superpower and accepted my mission of driving the Ace where I found a plastic handled sledgehammer.  Brilliant I thought, he can’t break this one.  I returned and Bill approvingly looked at our new tool.

Truly a tool that Bill could use to smash anything into submission!  He grabbed it from me, took another baseball swing at the post, the force of which almost knocked me over and the sledgehammer hit home on the post.  The ringing that came from that post may have knocked out satellites.  I believe that it is still traveling through space till this day.  The vibration from the hit shattered the concrete below and now we could dig out the concrete with ease.  Bill smiled and was very satisfied with himself.

He raised his eyebrows and got a sideways smile (if y’all knew him, you know that look when he was pleased with himself) and said well, let’s dig out that concrete, we should be done in couple of minute and then we’ll watch the game.  Bill grabbed the shovel, jabbed it in the ground, used his foot to jam it down…and broke the shovel.

We all had a long week.  I had some sleepless nights that led to a lot of thinking.  Why were we such close friends?  What was it that facilitated this 40-year friendship?  Why were we as close as any brothers related by blood?  I prayed about it and thought about it for days, coming up with answers, only to discover it reduced to one thing.  Bill’s passion for life and people.  That’s what I admired so much about him and it kept me fully engaged to Bill’s other superpowers.

Remember I said he had superpowers earlier.  His other superpowers were love and forgiveness.  Bill loved a lot of folks.  He was the glue to keeping his family together and I’ve had at least 20 guys tell me that Bill was their best friend. His first wife Sheri, Lacie’s mom, is also one of his best friends.  She’s right there in the front row with us today.

That was Bill.  No one else was capable of keeping a dozen or more 40+ year friendships going while simultaneously befriending hundreds of new best friends, loving all those sisters, aunts, uncles, cousins, nieces, and nephews scattered across the country, getting to every event that Lacie ever participated in, keeping his ex-in laws happy, spending time with a granddaughter and keeping an ex and present wife happy, meanwhile keeping my cranky tail happy.  Bill managed this miracle because he loved easily and forgave quickly.

This week we’ve grieved and slowly, I’ve felt a rage build up inside of me.  I know many of you have felt the same thing.  And when this rage built to a peak and I was ready to explode, I felt God’s hand on me.  And He said “redirect it”.  I thought, I’m going to redirect my anger and I’m going to do it like Bill would want me to do.  I’m going to be more passionate about my God, my family and my life.  I’m going to love easier and forgive faster.  I challenge everyone listening to my voice to do the same.  Bill would want you to.