The attached 1959 Park Place Substation night shift photo shows eight of the officers that handled the southeast quadrant of Houston on the Late Shift.

If anyone recognizes the unknown officer, please contact SPO Johanna Abad at the HPD Museum, Tom Kennedy – the editor, or someone that can let us know the identity of this officer.

Officer Oscar Smith was a Park Place Desk Officer for a long time.  Roy Drude and Tom Sandel were regular partners. Howard White became a Robbery Detective/Sergeant.  Bobby Blalock spent many years in the Criminal Intelligence Division. Paul Beeman worked many years in the Vice Division.  Bill Gaines eventually made Deputy Chief, coming up through the ranks the hard way.

In 1959 two-man units were standard with one-man units usually reserved for the “paddy wagon” and, later, “Investigator” cars that basically were crime scene officers that would lift and tag fingerprints and gather other physical evidence. These four units handled all the calls in one quarter of the City for 8 hours.

There were no portable radios or bullet-proof vests for patrolmen.  Your lifeline was the radio in your patrol car. Your first and main line of defense was your brain – your second was your partner.

Your sergeant handled all of your questions and discipline up through termination.  He didn’t really want to hear from you unless there was a significant malfunction that needed his authority and/or ability to handle.

Chief Herman Short, longest serving chief in HPD history, and Mayor Louie Welch, who served five mayoral terms, made a concerted effort to recruit as many qualified officers as they could.

The accompanying Park Place Roll Call Sheet for the Evening Shift shows the growth of the Department over the next eight years. It was typed from the old handwritten sheets and the “notes” are included for a bit of clarification.

It was around 1968 before the wool shirts the officers in the photo are wearing were replaced with a second “summer” long sleeved uniform shirt of cotton. The old wool shirts remained the “winter” uniform.  [I still have my first name tag along with a set of the silver buttons that had to be removed and replaced on each shirt.]

When Class 38 graduated in August 1968 we were issued these shirts.  There was no air conditioning in the 1966 and 1968 Plymouth patrol cars.  The new cotton shirts were at a premium and it was at least six months before the department issued any summer shirts.  It was even longer before short sleeves were authorized.

Officer W. W. “Wee Willie” Bell, a senior black officer, took mercy on this poor white rookie and gave me one of his. I have never forgotten his kindness.  It had one elbow patched but it was a prized possession. My wife washed, starched, and ironed it five days a week until I was able to acquire more.

In March of 2010 it was learned that the Park Place Substation was scheduled for demolition. A bunch of the old Park Place Rangers and others met for lunch next door to the old building.

After lunch some of us took one last tour of the old building and took the accompanying photos at the back door loading dock/parking lot area.

I drove by a couple of days later and the building was demolished and was in the process of being hauled off.

Back in 2014 Larry Watts, HPD Retired, wrote a short paperback book titled The Park Place Rangers: A Series of Short Stories. You can get a copy on Amazon.com or go to his website.  He also wrote Dishonored and Forgotten about a tragic death that occurred at 61 Riesner St.

“Gone But Not Forgotten” seems an appropriate epitaph for The Park Place Substation. 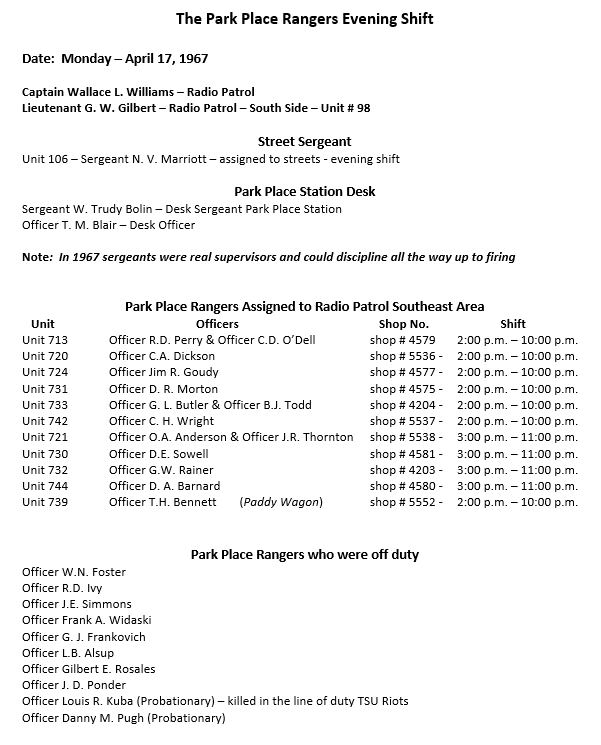