You might say Scott Peak knows what it’s like walking in the boots of a Houston Police Officer and now has no problem selling new pairs to the men and women in Houston Blue.

Peak covers the retail waterfront from Beaumont to Corpus Christi for Lawmen Supply Company, a subsidiary of the Municipal Emergency Services (MES), the largest and most recognized first responder and law enforcement equipment supplier in the United States.

You name the equipment, Lawmen Supply has it and Peak can put it in your hands as promptly as technology allows.

His sales pitch gets to the point: “Everything is discounted to Houston officers,” Peak vowed in a Badge & Gun interview. “It’s tax-free and we ship to whatever location they direct us to.”

This sales rep easily talks about the everyday needs of Houston officers. He knows, first and foremost, that officers have to dig into their own pockets to purchase certain equipment.

Peak, a former high school and college basketball coach, also is a one-time HPD officer, serving from 2008 until 2020 before entering private business.

“When I was in patrol there was so much to buy on my own,” he pointed out. “The department issued so much but there was still a lot you ended up having to buy on your own – a second set of cuffs – hinge cuffs like we had 10 years ago when I was on patrol. Your boots would wear out and you had to buy a new pair.”

He continued, obviously recalling his recent past. “You have to have so many pairs of undershirts and gloves – equipment that you wear out that we sell.

“Some officers will buy their own ballistic plates to add to their armor. We sell plates at discount prices. We have pocket knives – which are easy to lose. If you’re on night shift you need flashlights. There are so many things you buy on your own and you walk in somewhere and you’re not necessarily getting a discount.”

Yep, Peak knows both sides of the business. Like in his coaching career, he plays to win and makes it a win-win for the seller and his customer.

Peak joined HPD in Academy Class No. 201 in 2008 when he was turning 36 after more than a decade as a basketball coach. His dad, Paul Peak, was at one time the head basketball coach at Texas A&M – Commerce, a Division II school, amassing a record that included post-season tournament appearances.

The younger Peak worked night patrol at North Station and went to the Greenspoint day shift before successfully applying to become an HPD solo motorcycle officer. He took early retirement, he said, because “I had an opportunity through a family member and felt like I needed to jump on it.”

He said his age also had something to do with it. He joined the department late and felt he needed to undertake the job opportunity while he was still young enough to be successful.

Peak stressed, “I didn’t leave because I was disgruntled. I just had an opportunity in the oil business that I felt I couldn’t pass up. I miss a lot of what I was doing.”

Now examine at what happened in America and throughout the world in 2020. The coronavirus severely affected a lot of lives and careers. Peak felt a direct hit – he got laid off as the oil business suffered.

But, hey, like a basketball coach well knows: you have to rebound, and rebound former Coach Peak did, landing the gig with Lawmen Supply. Peak has a handy laptop and cell phone and frequently travels each to Beaumont and west to Corpus Christi, while conversing with many officers everywhere in between.

The transition was an easy one, the former officer said, saying he had no problem adhering to the company’s mission statement – supplying law enforcement officers “with the highest quality equipment” in the context of excellent customer service – and holds great appreciation for the key element to the company’s success.

“Every sales rep is former law enforcement,” Peak said with pride. “The whole company is former or retired law enforcement. We understand better than our competitors what our officers actually need.”

Peak is the only former or retired HPD officer amongst the nationwide sales force. He is one of seven reps in Texas.

Pressed about the product current officers seem to need the most, Peak readily brought up the subject of ballistic plates, describing them as “being in heaviest demand.”

He also expressed hopes that Lawmen Supply would be in the running when HPD signs a new contract for ballistic vests. “There is an expiration on each vest every five years,” he said.

“We’re looking forward to helping officers just on the individual level. I’m really glad to have this job because I can continue to be connected to HPD. I didn’t leave because I didn’t like it. I was older and had this opportunity and was able to help out my brothers and sisters. I’m truly enjoying that.”

Peak has stayed in shape – his wife, Joanna, has owned a personal training business for 20 years – aptly named Peak Fitness. A college basketball player, Joanna and Scott got to know each other while serving as graduate assistant coaches under Peak’s dad at A&M—Commerce.

Peak grew up in Georgetown, Joanna in Houston. They both became basketball coaches, Steve landing a job at The Woodlands High School, experiencing great memories that go with success.

“One of my junior varsity teams went 30-0,” he said, his coaching pride still evident. “We could have beaten a lot of varsity teams.”

His basketball coaching career enhanced his abilities as a Houston police officer and still shape his approach to his current business.

“I felt like it gave me the ability to communicate real well when your emotions are high or not. You still have to have a cool head to be able to focus on what’s important.”

Then came an excellent sports analogy for successful policing.

“You want to win. You are balancing 10 different things: who you should put in, who has an attitude, what you should be running or not running, who’s hurting you.

“You’re managing a scene and gathering a quick assessment of what’s critical and what’s not.

“There’s no doubt about it – before I was even in the academy I felt like teaching and coaching helped me a lot. And kept me in shape.”

Of course, Peak has the same approach with Lawmen Supply. And as for staying in shape, Joanna the trainer will take care of that. 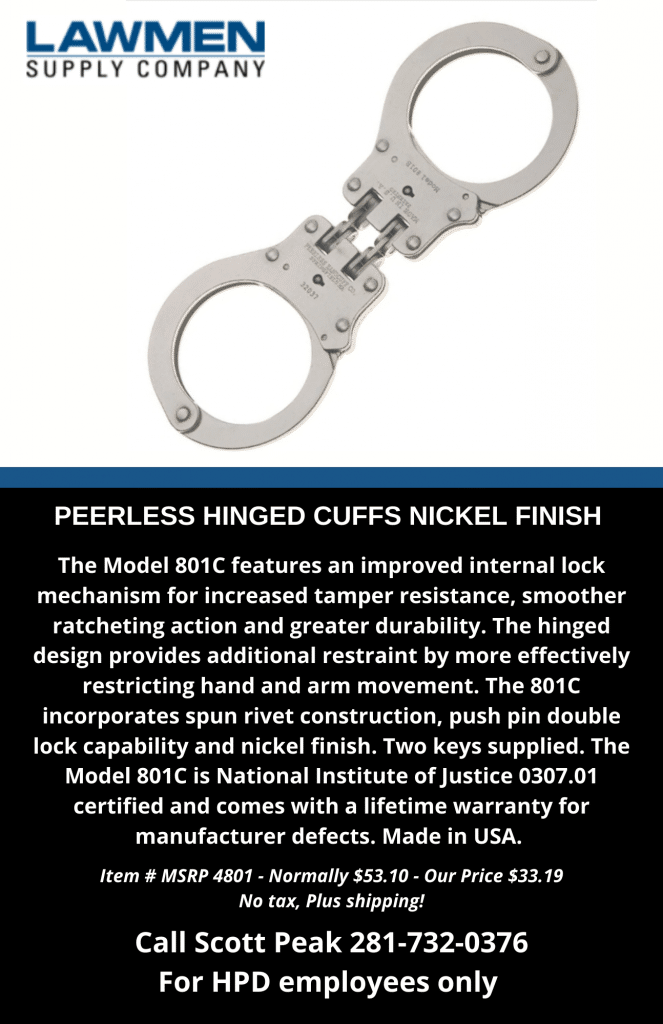