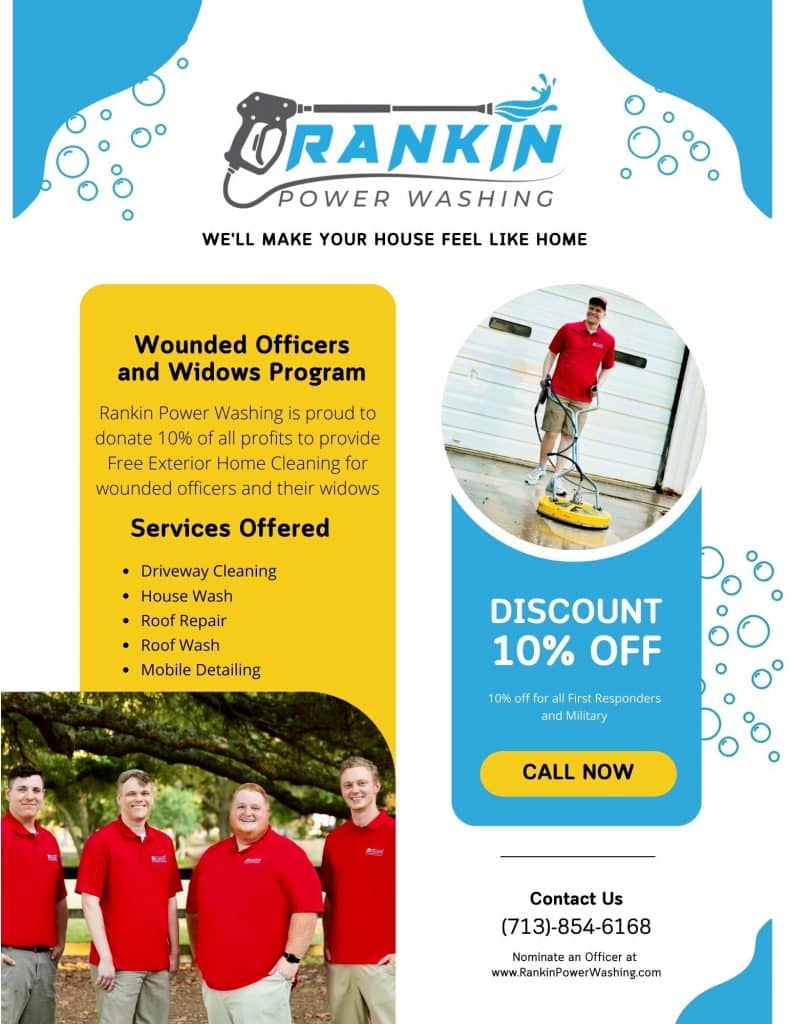 Matt Rankin has a soft spot in his heart for widows. He says it all began in large part with the Bible story about the widow’s mite.

As the story goes in the Gospel of Mark, an indigent widow went to the temple amongst wealthy parishioners. When it came time to taking the offerings, the wealthy contributed to great amounts, while the widow coughed up two mites.

The widow’s mites together were worth the equivalent of two or three cents. Jesus used the experience to demonstrate that the widow’s offering meant more because it was all she had to give.

Rankin, the owner of Rankin Power Washing, takes the story seriously and wishes he could help every widow in need, a goal easily identified in today’s world as being impossible.

So here is how Rankin improvises on the idea. He decided to in effect “tithe” 10 percent of his business hours to provide free power washing services to widows identified by both church groups and the Houston Police Officers Union’s Peer Assistance, administered by 2nd Vice President Tim Whitaker.

Whitaker and Rankin and his family developed a friendship as members of Second Baptist Church. Rankin said he had a friend in the military service who died from wounds suffered overseas. His widow was left to maintain the couple’s house, a daunting task that resulted in “a downgrade in house maintenance.”

Rankin told Whitaker he wants to provide his power washing services free to designated HPD widows to help them “make their house a home again.”

In addition, Rankin’s respect for law enforcement means a 10 percent discount for all HPD officers. He freely lists his business phone – 713-854-6168 – and website: www.RankinPowerWashing.com.

Then he explained his gamut of services.

The most basic is what he calls the Curb Appeal Package, the power wash of driveways, sidewalks, walkways up to doors.

Rankin loves going into details about the benefits of each service. What he calls “soft washing” cleans out a lot of algae, dirt and grime in hard-to-reach cracks and crevices of roofs and eaves.

Some outside portions of houses require the strongest power washing, but usually great care must be taken to clean out areas where too much power might damage roof shingle.

He emphasizes the care taken to wash exterior ceilings and soffit – the board in between the roof and siding around the ventilation for a roof. “We clean the surface of those,” Rankin explained, “and the facial boards which protect the soffit boards.”

He said, “The other thing we wash a lot is a roof. Looking at your roof we find algae buildup and mold. We use organic chemicals that will kill any organic buildup. We get your roof to be the same color everywhere. Roof repair is often included in this service. We can offer roof repair if it’s safe to do.”

Rankin was in the restaurant management business before the pandemic. He did roofing before deciding to develop the power washing business as his full-time endeavor.

He currently has one full-time and two part-time assistants: Jordan Scott, the full-time residential operator, and Cole Moxley and Dean Schumann, part-time employees who specialize in both residential and commercial cleaning operations.

Rankin uses a time-lapse video camera to record the before and after appearance comparisons to show potential customers the dramatic differences in appearance can make by converting a dirty situation into a clean one.

He is candid about his calling to help the widows with houses.

He urges people in the community to go to his website and “nominate” possible recipients of the free power washing service. GoFundMe accounts, he said, could help pay for chemicals used in Rankin’s operations would enable him to help more needy widows.

Now he will work with Whitaker to determine an HPD widow in need.

“We’re trying to get back and help as many people as we can in our community,” Rankin said, “especially those widows of wounded officers or those who gave their lives in the line of duty.”