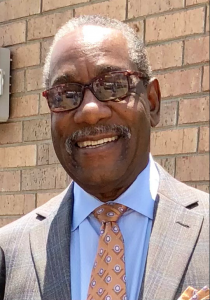 Like many HPD officers planning a retirement, Bennie Green had a burning desire to buy an RV and travel around the nation to see the world around him.

Green graduated from HPD Cadet Class No. 60 in 1973 and spent 31 years with the department before retiring in 2004. He was a Navy veteran before becoming an officer.

He underwent the typical number of divisional changes during his police career but distinguished himself as part of the security team for Mayor Kathy Whitmire (1982-1992). Officer Green was known for his ever-diligent attention to detail and was known by the press corps of those days as a no-nonsense guardian.

After HPD, Green spent seven years as a constable in Precinct 7. He retired there, too.

Then something disrupted the travel plans he had for him and his wife Betty, a now-retired psychotherapist.

“My kidneys stopped filtering on me,” Green explained. “I’ve been on dialysis for over three years. I’m already on the transplant list at Methodist and I’m trying to get on the one at UTMB in Galveston.”

Getting on those lists is no easy task. He had to endure numerous tests, a process that seems – and, practically speaking, is – endless.

The most important medical factor is “the match.” A kidney from any potential donor must match what Green needs as a replacement.

Meantime, Betty drives him to dialysis every Monday, Wednesday and Friday. He might rank high on the list but not match the donated organs that become available.

“They put you on the list and someone comes in with a matching kidney. In most cases it means you’re going to get it,” Green explained, relating the experiences of those on a list like this one. “Sometimes they’ll call to say they have a match. But he (kidney patient) didn’t get a transplant until after the second time they called him.

“There’s always somebody ahead of you.”

Again, we say, like HPD, he needs all the seniority he can get.

There’s another possibility, albeit a remote one in these times.

“Somebody could come out and say they want to donate a kidney to me,” Green ventured to say in an interview. “That works.”

“It’s a tough battle, man, I tell you. I retired in 2004, then spent seven years in Precinct 7. I decided I didn’t want to work anymore. I came home and was all right. Then one day I got sick. I had an enlarged pancreas. The doc put me on medication he knew was going to make me sick.

“This is something that really breaks my heart. You work so many years and you want to get an RV and travel over the country. It just didn’t work for me.”

Working every day and night with Mayor Kathy Whitmire was probably the highlight of Green’s HPD career, which also saw duty in traffic enforcement, vice, Central Patrol, the jail, civilian employment and Recruitment.

Mayor Whitmire spent 10 years in the Big Chair at City Hall. Bennie Green was standing behind her in public appearances for more than nine and a half of them.

“When I decided I was not going to be up there anymore,” Green recalled, “she wept a little bit. She didn’t want to see me leave.”

As mayoral security and in many of the other roles he played in the department, Green said, “The fact I was in the military in Vietnam twice and was a police officer made me tough.”

We also must point out that Green was the leading hitter on Whitmire’s softball team that competed against the ever-powerful City Hall Press Corps. He almost hit one out of the park at Memorial Park Field No. 1.

While Green’s Navy career extended into four years in the Naval Reserve, his son Brion spent 22 years in the Navy, retiring as a chief petty officer. Green also has three grandsons in Florida. One of them, Benjamin Luke, has just earned a scholarship to play college baseball in Florida.

A new kidney would enable the retired HPD officer, constable and Navy veteran to take Interstate 10 to the Sunshine State to see baseball games and grandsons.

“I need a kidney,” said Green, who is Mayor Sylvester Turner’s neighbor in the Oaks of Inwood. “I just want to get an RV and see the country. I intend to do the driving.”