OK, all you HPD people out there who have known retired long-time SWAT Officer Sandy Wall, well, he now has an “AKA.” He’s now also known as Andy Wallace, a “fictitious” HPD officer who, among other assignments, served a good while in SWAT.

You must have heard: Wall has written his memoirs in which the names were changed “to protect the guilty,” the writer said through that laugh you hear as police war stories are told around the table or at the bar.

The Long Road Home was inspired by the years of thinking Sgt. Wall did after a day of duty while driving home to his Fort Bend County residence. Sometimes the story of the day was – as the book’s blurb states “exciting, dangerous, funny and sometimes brutal” in the world of a big-city cop.

(The Badge & Gun has included the book flap information about the book herewith as well as one sample chapter, Stick ‘em Up!

Wall spent 22 of his 28 years after graduating from Cadet Class No. 75 in the exciting and surely dangerous world of SWAT. He retired in 2004 and worked for the Safari Land police supply company for 14 years before another retirement.

He needed something to do. So, he responded to the urging of many friends – he wrote his memoir as fiction, counting on his wife Theresa, a high school government and economics teacher, as a steadfast editor.

Can you read through the factious names and identify the real characters they are based on? The question was posed to the author.

Why do young men leave the comforts of home and journey into an unknown to make their mark on the world?  Is it to escape the everyday of small-town life or is it to seek the kind of challenge and adventure that could never be found at home?

The Long Road Home is the story of a fresh faced, naive young man who did just that.  Andy Wallace escapes his South Texas small town to embark on a career as a “big city” cop.  Longing to emerge from under the shadow of his successful older brothers, Andy is willing to risk his life and confront an evil that most of us could never imagine, all while struggling to keep his own demons at bay.

Andy’s life changes forever when he joins the Houston Police Department and experiences the exciting and sometimes shocking challenges of a cop on the beat.  His decade’s long career takes him from fighting street crime and chasing crooks, into the dangerous world of narcotics trafficking in the nation’s fourth largest city.

As Andy matures, he accepts his ultimate challenge on the Houston S.W.A.T. Team and his limits are tested like never before – this dark journey sends him into the pitfalls of living on the edge where he must face his greatest fears, control his emotions, and finally confront the adversaries who have taunted him along the way.

A must read for those who want a front row seat into the life of a young cop coming of age and the struggles that harden his persona. This is Andy’s story of finding inner strength and dealing with his weaknesses as he struggles with life, death and redemption that lead him down the Long Road Home. 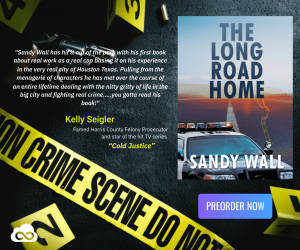 Wall laughed – as police officers who read this book are bound to.

“They are based on real characters at HPD,” he explained before he answered the question: “I doubt it – at least not the current guys. The retired guys got everybody figured out. They say, ‘But this guy was that guy.’”

And that guy in the conversation about the book was the fill-in-the-blank name of the REAL officers who inspired the characters and vignettes detailed in Wall’s chapters.

It should be no surprise that the chapters in the book follow the same chronology as Wall’s career: the Academy, Patrol, the jail, Narcotics and, finally, SWAT.

“After I retired from Safari Land, I needed to find something to do to keep me busy,” Wall said in an interview. “People had been telling me, ‘Man, you oughta write a book with these stories you’re telling.’ My wife was a high school teacher for 23 years. She was my editor. I would write a chapter and she would rip it up with her red ink pen and send me back to my room.

“I would sulk and then write it to make it better. It’s fictional. These are based on real events. I make it dramatic with a big gotcha at the end. It was a labor of love.”

You can order The Long Road Home from Amazon.com or buy it from Sandy Wall when you see the real Andy Wallace in person.