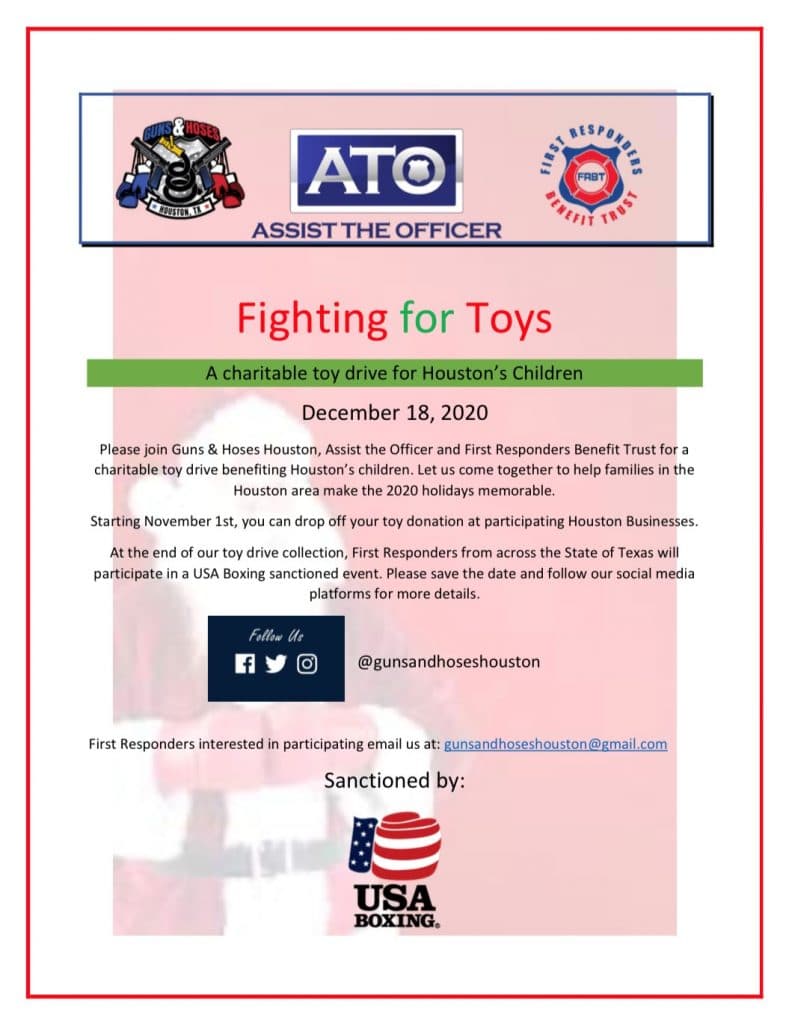 Like so many fun and exciting fundraising events, the first-ever “Fighting for Toys” – formerly known as Badge Battle Houston – was postponed and will be held under controlled conditions due to the coronavirus. Save the date: Friday, Dec. 18.

The program consisting of eight to 10 boxing matches between HPD officers, Houston firefighters and other first responders from the Gulf Coast area was reconfigured to become a concerted effort to seek toy donations for area children adversely affected by the virus pandemic.

Event coordinator, Sgt. Josue Villa of South Gessner Patrol, detailed the new plan for the Badge & Gun. It will be sponsored by Guns and Hoses.

These exciting boxing matches will be held at a yet-to-be-determined location that Villa said will meet all the safety standards necessary for the safety of all participants.

Guns and Hoses, the non-profit led by a board consisting of five first responders who volunteer their time to raise funds to help fellow first responders as well as at-risk kids who enjoy the sport of boxing.

The goal is to get toy donations for kids hailing mainly from Houston’s Eastside, Villa explained. So far two toy donation locations have been established with many more to come as soon as the sergeant can get their commitments.

Those two locations are the ever-familiar Buffalo Bayou Brewery Buffalo at 2101 Summer St. and Be Fit Gym at 2420 Rusk.

Villa’s format calls for the donation of a new toy in the $15 range. The toys will be distributed at Christmas with the primary recipients being Eastside kids whose families have been adversely affected by the virus. “Many families on the Eastside have experienced job losses and will not be able to purchase Christmas toys for their kids,” Villa explained. “Our aim is to help them.”

Sgt. Villa was very encouraged with the likelihood of getting more sponsors besides Buffalo Bayou and Be Fit by early next month.

Now, as for the audience format for the three-round fights, Villa said he and the sponsors will comply with Gov. Greg Abbott’s masks and distancing policy at the time. As Villa spoke, the policy entailed “75 percent occupancy.”

Originally scheduled in April, the boxing matches were to pit boxers from as far away as Los Angeles PD and SO against Houston police officers and firefighters. That changed, of course, although Villa explained a hard and fast rule:

“These will all be USA Boxing-sanctioned amateur fights. You must be sanctioned to participate, and all of our boxers will be. They will be from HPD, HFD, Harris County firefighters, deputies and constables, Waller County firefighters and first responders from a lot of agencies from the Houston area.”

The sergeant was very encouraged by the number of prospective sponsors who, when confirmed, will supply toy donation box locations which will be publicized well before the Dec. 18 event.

“We’re three months away,” he said, “so it’s going to be changing.”

Villa said he will be working with Assist the Officer as well as organizations dedicated to identifying families in need of Christmas toys. He mentioned the Green Marine Foundation.

“We want to bring some type of joy to the kids at Christmas,” he said. “These will be their Christmas gifts.”