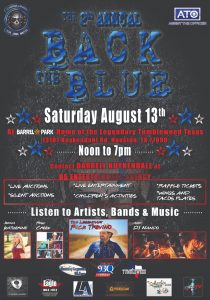 You still have time to attend an exciting Assist the Officer event this summer– the Back the Blue set for Saturday, August 13!

First, we’ve got to tell you how to get there. The venue is Barrel Park Houston, home of the Legendary Tumbleweed Texas at 13101 Kuykendahl. Admission is $5.

This is the second Back the Blue extravaganza that features food, live music, silent and live auctions, and all sorts of fun that starts at noon and goes to 7 p.m. Those in attendance will be excited to hear Grammy-winning country music artist Rick Trevino, 17-year-old singer/songwriter Jenna Katherine and Rush Creek, a popular group that features all different types of country music.

Jenna Katherine will open the festivity singing the National Anthem.

The backers also will see a Fox helicopter land nearby in this FM 1960 area venue. And then there’s a special appearance by the HPD SWAT team.

The first Back the Blue event was held in 2019 and raised close to $50,000 for Assist the Officer. The story of the event’s development has deep roots in the Houston Police Department.

The promoter is Darrell Kuykendall, who laughs and says there is no connection between his last name and the venue address on Kuykendahl. “I spell mine with a double L,” he explained.

That Kuykendall name has an HPD connection. Officer H. L. Kuykendall was a 17-year Narcotics officer who suffered a heart problem while on duty. He later died after an emergency heart operation. Darrell was 12 years old at the time. He also was the best friend of an individual who “always wanted to be a law enforcement officer” and ended up making a career in HPD, the younger Kuykendall told the Badge & Gun.

That officer in blue is none other than HPOU President Doug Griffith. Darrell initially wanted to be an officer but opted for the entertainment business where he “books bands” on a regular basis all over the place. “But Doug stuck to his guns,” he said.

He shared with his long-time buddy – “we’ve known each other since we were five years old” – his desire to help officers in a productive, meaningful way. The first Back the Blue was the result. A super fundraising tradition was established!

“We’re planning to do this every year,” Kuykendall explained. “We’re making it an annual event at different times every year. It could be in the fall, summer, or spring – whenever we can work it out with everybody.”

HPOU’s Griffith, as expected, said he could count on the support from ATO and the Union anytime, anywhere.

Admission receipts all go to ATO. Portions of food sales and sales from various vendors set up at the event will go to the cause as well as a portion from the auctions which will feature memorabilia donated by Showcase Silent Auctions.