The mayor, the chief, two members of Congress, a council member/friend, his best friend ever and a fellow graduate of HPD Cadet Class No. 86 took turns eulogizing Sgt. Harold Preston on Oct. 29, each of them calling him a hero before his daughter, Alison, took the floor.

Alison Preston echoed what the other speakers had said – that her father the HPD sergeant was kind, gentle and caring for his family, his Blue family and his community. But there were some additional bits of information and opinion from his only daughter.

“Black lives matter,” she said. “Uniform on, uniform off he was still a black man.”

She humanized Preston as only a loving daughter could: “He loved his popcorn, his pecans and the New York Times. He had his nutcracker and would crack his pecans. He laughed at his own jokes all the time.”

Even before delivering the punchline.

Preston also was a camera buff – “we were a Nikon family” – and he loved collecting coins. His best friend, Othellus Davis, said he preferred the symphony and ballet to baseball and football and was embarrassed when Davis fell asleep at a Houston Symphony performance.

“How did he stay so young?” Alison asked the hundreds of officers and citizens gathered at Grace Church to mourn the loss of her father. “I don’t know how he stayed looking so young.”

She said she made a list of probable reasons that included taking a daily walk or ‘getting exercise.” Then she listed what she considered to be the main reason: “When you get mad at your daughter don’t yell at her just look at her. Just stare at her like this.”

“I think I want everybody to do that when you think of my father. Be kind to everybody.”

That was the way Harold Preston lived his life, spending 41 of his 65 years with the Houston Police Department. His best friend Davis said he had urged the veteran sergeant to retire for the past few years, asking him to please settle down and take it easy at a desk job.

As we know, Preston wanted to keep working. HPD was his life. He was a dedicated supervisor, community servant and mentor. He was shot to death Oct. 20 while answering a domestic disturbance call at a Holly Hall apartment complex. His killer is charged with capital murder of a police officer and assault to murder a wounded HPD officer, Courtney Waller.

“And the last thing I said to my friend,” Davis told his fellow mourners, “I don’t know if it’s good or bad. I said, ‘Harold, you’re pushing the odds way too far.’ ”

Preston hung up on his long-time buddy, who said, “I’d been trying to get him to retire for years but he was a hero, a warrior. Warriors do what warriors do .”

That’s what Sgt. Preston was doing when he died in the line of duty while he and Officer Waller assisted a domestic violence victim trying to move out of her apartment safely with her teenaged son. Her husband was there with a gun. He’s the one facing capital murder charges.

Preston was the 117th Houston police officer to die in the line of duty since 1841. He was the third in the last 12 months and the second sergeant to die in a violent domestic abuse scenario.

Police Chief Art Acevedo alluded to these grave facts, wishing we didn’t have to keep meeting like this. Grace Church also was the venue for the memorial service of Sgt. Chris Brewster last December.

Jackson Lee and Green paid special tribute to Preston, each of them presenting Alison Preston and her grandparents with flags that flew over the U. S. Capitol in Preston’s memory.

The term “hero” was used throughout the eulogies.

Chief Art Acevedo added to Preston’s long list of commendations with his presentation of the HPD Medal of Valor for saving Waller’s life as he was being shot to death. “We are calling him a hero for everything that led up to that moment,” Acevedo said.

Preston hailed from HPD Academy Class No. 86 from 1979. He and Officer C. J. Barnes were the only two remaining members of that class who have been with HPD the full 41 years.

Retired Officer Chuck Hutchinson spoke on behalf of the class, recalling that he and his fellow classmates were trained, not at the academy, but at 61 Reisner, where Preston’s commitment to policing surfaced during roll calls “standing on the hot asphalt 45 minutes at parade rest. “We were always hearing his voice,” Hutchison said.

“I cant imagine what Harold looked like when he got angry. I never saw it. He had an infectious smile that warmed your heart, and, nobody has mentioned this but I will. He had a little grin. You had to watch out for that grin. It meant something. You had to watch Harold. He was sneaky.”

Not a sneaky meanness, a sneaky endearment.

“Harold was the type of person that when you sat down and had time with him you walked away and you dipped your chin a little bit and you said to yourself the following things:

“Boy, I wish I could be like that. You took a little part of him when you left. And it was a beautiful little gift that he gave. He didn’t just give it to us he gave it to everybody that he met.

“He was a man of grace and good heart that will live amongst us today.’

The retired officer faced the score of HPD and other law enforcement officers present to pay a special tribute to Sgt. Preston and police officers everywhere. He said:

“I am not one, I am many. Being a part of something great requires that you are surrounded by great people. If one falls, , we all walk the same path. We are one, there is no sex or color that stands between us as we walk our path.

“We embrace each other, we are one because we draw together. You cannot hurt us, we will survive, we watch over each other.

“You will never understand us, what binds us together, but we are one. We share a common goal, a common fear, and we face it together.

“Today we mourn for our loss, but we mourn together. God bless our police officers.” 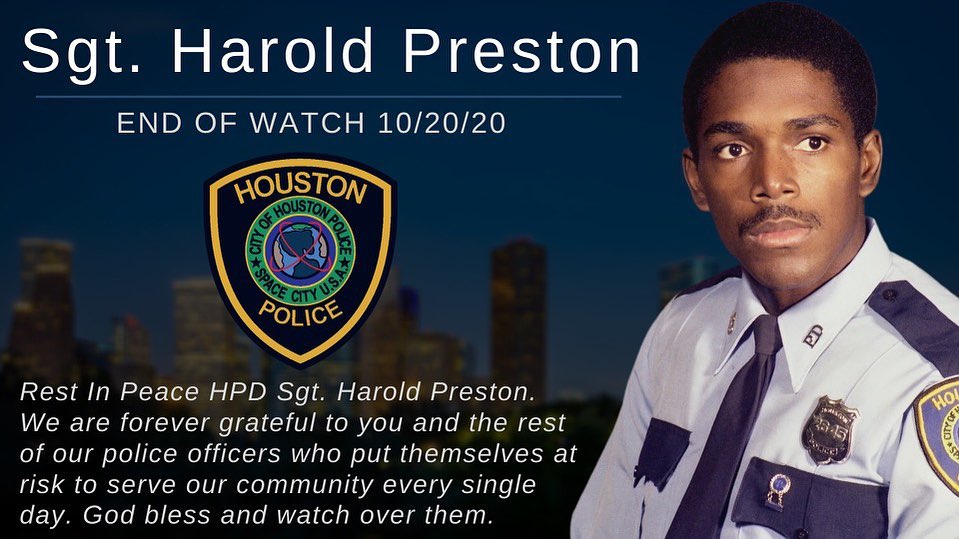