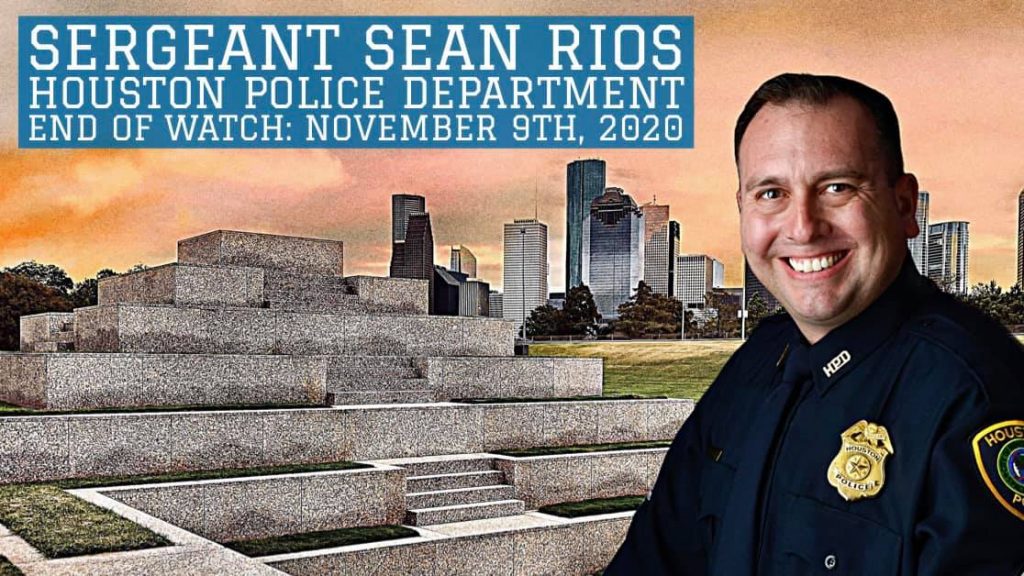 It was Wednesday, Nov. 18. It seemed we were hearing the same sad song, fourth verse, being regurgitated one more time.

It might be safe to say no one at the all-to-familiar-yet-reliable venue of Grace Church Houston wanted to hear the eulogies once again for a Houston police officer killed in the line of duty.

The HPD chaplain said it all, the same words often heard at sad events like the celebration of Sgt. Sean Rios’ life: “First and foremost, I must say that we have to stop meeting like this.”

And Chaplain Vincent Johnson, as eloquent as ever, led off with a recitation of Sgt. Rio’s 25-year HPD record, a distinguished file thick with accolades for jobs well done.

Both Police Chief Art Acevedo and Mayor Sylvester Turner took turns speaking, praising Rios as a hero and devoted family man – to both his four children and his brothers and sisters in the family of Houston Blue.

The tributes were led off by Senior Police Officer Ken Nealy, the HPOU 2nd vice president and a fellow classmate of Rios in Academy Class No. 1965 from August 1995.

“Every class has a class model,” Nealy told the large group of socially distanced mourners. “In our class Sean was the model.”

Neely told the Badge & Gun he joined his fellow officers in continuing to lament the loss of four colleagues within a one-year period. Services for Sgts. Christopher Brewster and Harold Preston also were held at Grace Church, Preston’s less than a month ago. The fourth line-of-duty-death victim, Fox Officer Jason Knox, was memorialized at Houston’s First Baptist Church.

“This was a different because it was so personal,” Neely said. “Sean was my classmate  and he set the example for being a good officer right from the start. He graduated from high school and went to the Marine Corps and when he finished with the Corps, he joined HPD.

“It was his motivation that made him a great model. During the class you ve got driving and shooting. His driving was excellent, his shooting great and, academically, he was top notch, he sure was.”

As a veteran HPD hostage negotiator, Neely offered a prime example of Rios’ motivation and dedication to being a well-qualified team-playing police officer.

Some years ago, SWAT and Neely were summoned to a shooting scene being handled by Rios. The shooter was embedded in his home. “In this situation,” he explained, “we needed as much intel about the subject as we could get. Sean had everything we needed and more.”

His shooting also showed A-team expertise. In the shootout with the suspect, Rios had fired three shots –“I later examined the scene and found that all three shots had struck the burglar bars that separated Sean from the suspect.”

Had there been no bars the suspect would have suffered three gunshot wounds at center mass.

“Literally the burglar bars saved this guy’s life,” Neely remembered. “God must have been watching over him. All the shots were in the same spot. He kinda laughed about that.”

Rios, who grew up in Pasadena, hailed from a police-oriented family. An uncle, Richard Nieto Sr., served HPD just one month short of 45 years. His son, Richard Nieto II has been on the force 27 years. Two other cousins, Javier Haselberger and Jonathan Villareal, are both undercover narcotics officers.

The younger Nieto was especially close to a fellow officer he had mentored at Central Patrol. He became a good friend and mentor to Rios before Rios connected two family bloodlines and discovered, “Hey, we’re cousins!”

Rios’ parents are George and Bonnie. George was brother to the man both Rios and Nieto knew as “Uncle Manuel.” And then there was his wife, “Aunt Vigi.” Vigi, short for Virginia, is the sister of Richard Sr.

The rapport that developed on the Evening Shift widened with the discovery of the family connection. Nieto laughs when he realized he had become a “mentor” to the rookie officer even though he himself had been on the force only 18 months.

They never partnered but “watched each other’s back” while patrolling Central’s districts.

Nieto was firm in his assessment of his cousin:

“He was a positive go-getter! He had a good attitude and always has a smile, a very affable person who you could talk to very easily.

“We didn’t ride together. We checked by with each other on calls. He always wanted to make sure he had your back. I was always very impressed with that.”

Examples? Sure, and one stands out despite the fading of a 25-year-old memory.

Nieto recalled a violent arrest in the Heights. He wrestled to put handcuffs on a suspect, who called out to his cousin for help

“Hey, Chuy!” the suspect screamed. “Get this (blankety blank) off me!”

Nieto held the suspect to the ground with one arm while trying to fend off Chuy with the other. Chuy got scared and fled the scene before backup emerged.

Next day Rios asked his cousin all about what happened. “This is our highest priority today,” he vowed to cousin Richard. “We’re going to find (the guy).”

“He had my back,” Nieto said nearly a quarter of a century later. Then he perked up at the recollection of the then-young officer’s expertise after being on the streets only a short period of time.

He pressed Nieto for all the information, learning that he only knew the suspect by his nickname, Chuy. That, plus the physical description, was all the intel available. It was enough.

“This meant that we could search for a man with the first name of Jesus who was the same age and description as the man who assaulted me and ran away,” Nieto said.

“From Sean’s knowledge and our investigation, we got a warrant.”

The cousin paused and then made the point yet again: “He had my back.”

Rios died at the scene of his shootout with one suspect on Nov. 9 off Interstate 45 North at Stuebner Airline. He was en route to his assignment at Bush Intercontinental Airport. A second suspect adopted the same plan as “Chuy” – he fled and was not immediately apprehended.

As Chief Acevedo pointed out at the memorial service and before TV cameras everywhere: this man will be caught. It’s only a matter of time.

HPD has Sean Rios’ back!

Mayor Turner proclaimed Nov. 18 “Sgt. Sean Rios Day” throughout Houston. In what seemed to be a variation of other recent remarks eulogizing Houston officers who have made the ultimate sacrifice, Mayor Turner said:

Never to be Forgotten!

“This city is grateful. We are so very proud. Today we come to honor a Marine, a proud police officer for 25 years, a proud father, a great son, a tremendous relative. But it’s a reminder to us that this city has been and continues to be blessed. We are blessed because of people like Sgt. Rios.”

The mayor turned to the Rios children and said he had lost his father when he was 13 years old but that at every major event in his life he has felt his father’s presence, love and influence.

Sgt. Rios, who had just turned 47, was known to be an ardent family man who loved pranks, talking politics and wrestling or mixed martial arts. He also took the kids to go-kart tracks throughout Texas and other nearby states. The four children range in ages 9  to 17. The oldest, Isabella, just turned 17, followed in birth order by Tristan, Luca and Giuliana. Also surviving Rios was his devoted ex-wife, Sarah.

Throughout the week-long grieving process many officers and friends told stories of Rios’ love of his family. His HPD family demonstrated its love for the model cadet who became a model officer and hard-working sergeant who earned numerous accommodations.

Officer Neely said 32 members of Class No. 165 are still active members of the Houston Police Department. Many other class members who have moved on were in attendance at the Nov. 18 memorial service.

They included three federal agents, several who have retired from law enforcement and others who have gone on to other positions in the calling. They include Texas Southern University Police Chief Mary Young and Splendora ISD Police Chief Colin Weatherly.

Among those still in HPD are Commander Mike Skillern, Lt. John McGalin and approximately six or seven sergeants.

Neely appeared to especially move these surviving Rios classmates when he stated the class motto: “Motivated, Dedicated, Full of Pride! He exemplified that. The class loved that I used our class motto from years ago.

“I believe Sean will never be forgotten and will make sure his family always remembers that.”

Another speaker at the service was not a classmate but a retired HPD lieutenant who gained deep respect for Rios long before his retirement in 2016.

Harris said constables routinely wear cowboy hats and Rios “would crack up if he saw me, a New Yorker, in a cowboy hat.”

He described Rios as loving classic rock. Fittingly, Harris quoted the lyrics of one example about “fighting for what’s right and remembering the heroes.”

Then he said, “And that’s what we’re remembering today, Sean.”

Harris echoed Nieto’s assessment of Rios being affable and always seeming to be smiling. “When Sean liked somebody, he would say things twice; ‘Tony. Great guy. Great guy,” Harris said.

The very special video tribute to Rios, accompanied by a Beatles song, All We Need is Love, spotlighted one picture of a smiling officer or a smiling daddy after another and another.

This presentation came after Harris recalled one accurate assessment of a Sean Rios smile.

“It’s perfect! He should have been in the after photo for an orthodontist.”

Chief Harris struck a powerful chord that surely strummed the strings of the hearts of the law enforcement officers and friends present when he said, “Evil is powerless when the good are unafraid. Sean was unafraid.”

“And may God bless you with just enough foolishness to believe that you really can make enough difference in this world so that you are able with God’s grace to do what others claim cannot be done.

“We all love you, Sean Rios, and we’ll see you on the other side.”