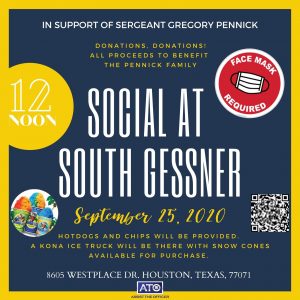 Once again Houston police officers are coming through for one of their own with special needs. Sgt. Gregory Pennick has been on leave caring for his wife with state 3 breast cancer, while simultaneously home schooling his two grade school children.

Officers at South Gessner, led by Officer Angel Waggoner, put together a special Friday social on a parking lot which happened to be designed for social distancing raised more than $7,000.00 in donations to help the Pennick family with the growing medical expenses.

“He’s been unable to work because he’s caretaker to his wife, Jeanette, and he’s homeschooling the kids,” Waggoner said.

She said South Gessner officers, led by Commander Ban Tien, decided to do more than deliver a few meals to the Pennick home. The fete consisted of hotdogs and chips at no cost, while participants were urged to make donations.

Recently retired Officer Curtis Mayfield served as disc jockey for the event and another retiree, ever-reliable HPOU photographer Gary Hicks clicked away at those posing for photographs.

Waggoner said Kona Ice supplied sno cones, with every dollar of the proceeds going to the cause at hand. She also singled out Commander Tien for picking up the tab for the hotdogs and chips.

“I just want people to donate,” the commander was quoted as saying.

Waggoner said any follow-up donations can be made through Assist the Officer.

Jeanette Pennick, a nurse by profession, learned the aggressiveness of the cancer about the time the coronavirus pandemic began. Aggressive breast cancer calls for aggressive – and expensive – treatment. There has been a limited number of other caretakers allowed in the Pennick home due to the virus exposure possibility.

Waggoner pointed out that while on family medical leave Officer Pennick is unable to work his extra jobs. “The cost of medication and chemo is so expensive,” she said. “That’s what we’re helping him supplement. He can’t afford to get sick or anything like that.”