As a Houston police officer in the early 1990s, Mark Stephens – a one-time 100 Club officer of the year – deeply lamented the loss of two of his fellow officers in the line of duty.

The father of a three-year-old son at the time, in his grief Stephens wondered what it would be like for his son to experience the death of his father the police officer.

“Two officers were killed back-to-back,” Stephens recalled in a recent interview. “It started me thinking about what their children were going through. I had this song kinda in my head. It was going over in my head when I went out in my garage and sang it and tape recorded it so I wouldn’t forget how the song goes.

“It’s something for my family from the viewpoint of the child of the officer that was killed.”

The song is entitled “Daddy was a Lawman,” and goes like this: 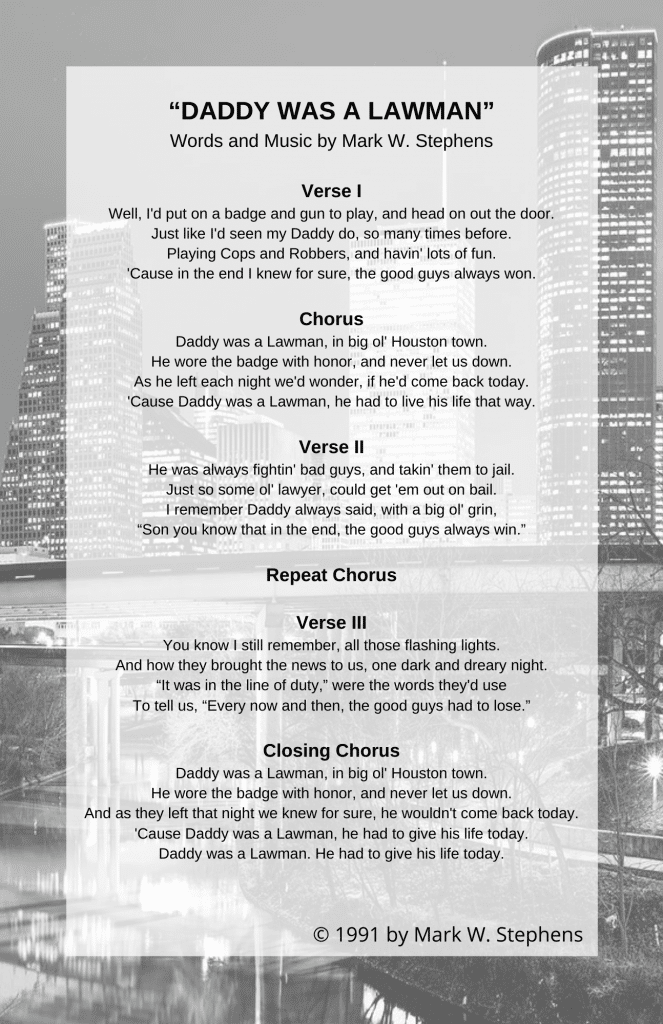 Now Stephens had little if any background in writing music, while his taste leaned toward the Country & Western genre. At one time he had his cousin put the words to music, yet the now-retired-officer-turned-private-investigator has not sought to get it published or sold on the label of somebody like Clint Black.

No, he was inspired by the line-of-duty deaths of his two colleagues – Jim Irby and John Salvaggio. Solo Motorcycle Officer Irby’s end of watch on June 27, 1990 came at the hand of lifelong criminal Carl Wayne Buntion, who murdered the officer in cold blood. Buntion resides on Death Row, having been successful in appeals that have delayed his death sentence.

Salvaggio was struck by a Katy Freeway hit-and-run driver a few months later, on Nov. 25. Bill Byrd, the driver of the vehicle which struck and killed Salvaggio, served two years of the five-year sentence he got for failing to stop and render aid to the officer.

Irby’s son Cody, who in fact experienced what Stephens alludes to in his song, became a police officer in Pflugerville, an Austin suburb.

The Stephens story gets better. Stephens married Laurie, the love of his live since fourth grade. The son who was three years old at the time Stephens wrote the song, now serves as – yes! – a Houston police officer.

The elder Officer Stephens joined HPD in Cadet Class No. 115 in 1983 at the ripe old age of 19. He grew up wanting to do the job of helping crime victims. His first assignment was Northeast – “in Fifth Ward where all the crime was.” His long-time partner became Jay Jansen, who later retired as a sergeant.

In his HPD career, Stephens earned more than 40 commendations. In 1991, he and Jansen were named Officers of the Year by the 100 Club of Greater Houston. The statistics tell the story of the partners’ work to take auto thieves off the streets of Houston. In a 10-month period the duo recovered 107 stolen cars arrested 252 suspects and returned more than $1 million in recovered property to the rightful owners.

To this day Stephens believes “this is a record that won’t be broken.”

Stephens and Jansen determined the location of where stolen cars “were being dumped” and from there traced the target areas of habitual car thieves, saying, “We kept a close eye on that part of town.”

He laughed when he recalled the number of car chases the partners got involved in – each one of them in pursuit of a stolen vehicle. They developed an effective technique of identifying stolen vehicles and how to make a successful arrest.

“We would get behind the car that was stolen,” the retired officer explained. “At a Stop sign we would shine the light on the steering column to see if the key were in the ignition. If there was no key in the ignition, there’s a good chance it was stolen.”

No key was a sure sign the steering column had been cracked and hot-wired.

One prosecutor failed to believe the use of this method, prompting Stephens and Jansen to take her on a ride-along and witness the shining light firsthand.

The prosecutor learned her lesson well. She proceeded to construct a special dolly outfitted in a reproduction of a steering column with the wheel to demonstrate for juror’s evidence involving a cracked column and “no key in the ignition.”

“We could testify how they got the car started without the key in the ignition,” Stephens said. Convictions always followed, for each of the cases brought forth by Stephens and Jansen resulted in convictions or guilty pleas before trial.

This was “the right-side approach.” The left-side approach was used when the officers pulled over a stolen car suspect on a traffic charge. When they saw the cracked steering column, inevitably the suspect took off and the high-speed chase began.

When Stephens wrote in the song about the dangers of being a lawman, he well knew the tune from his own personal on-duty experiences.

In one confrontation with an auto thief, he and Jansen got into a scuffle with a man with both a gun and a knife.

The suspect had robbed an elderly veteran of everything of valuable, including his automobile. “He stole virtually everything he had and loaded it in this man’s car. He even took frozen food from the freezer,” Stephens said.

“We got behind that one and there was a chase. When the guy finally bailed out of the car, there was a foot chase.” Stephens soon blind-sided the suspect as he was pulling a knife on Jansen. “He lunged at my partner as I cold-cocked him from his blind side. He dropped the knife and pulled out a gun.”

The two officers used the world’s oldest weapons – their fists – to subdue the suspect before he could get a shot off.

That was one dangerous incident. There were others.

Early in his career, Stephens left his future wife’s birthday party to report for duty. Early in the night shift he got involved in a high-speed chase, only to be T-boned by a state highway patrol officer responding to the same call. He was Life Flighted to Hermann Hospital, where “Dr. Duke worked on me,” he recalled in referenced to the immortal Dr. Red Duke, the renowned emergency room surgeon.

He survived that one, just like he came through during another scuffle with a suspect. His backup was a K9 officer. The K9 accidentally bit Stephens on the face and jaw despite the best efforts of the handler. Fortunately, a plastic surgeon was on duty near the emergency room. Twenty-seven stitches later the officer was ready to go home and explain what happened to Laurie.

With an arrest record such as it was and the large number of high-speed chases involving Stephens, you would think that lightning was striking everywhere he went.

Well, not everywhere. But it did strike.

Stephens and Bobby Roberts were involved in chasing an auto theft suspect who had casually pulled into a driveway of a home that he pretended was his. All this happened during a violent thunderstorm with thunder and lightning sounding and striking every which way. When Roberts left the patrol car to talk to the real owner of the residence, Stephens stayed with the suspect.

“It looked like fire rolling off the windshield,” Stephens recalled. “Bobby thought I had gotten shot. I could not focus. My right hand was crunched up locked in a fist. All the hair on my head was singed. I couldn’t hear out of my left ear.”

Typically, police officers with wives will do anything to keep from calling home to say they were in the emergency room.

Stephens spent the night in the hospital. This was the evening shift and the married officer refused to call Laurie to tell her what happened. He recovered and went home at a time Laurie usually expected him to be home.

“By the end of the shift. Bobby drives me home and lets me off,” Stephens said. “I had been super fuzzy. In the hospital I had given them my brother’s DOB and a phone number I had had as a child. It (a lightning strike) fries your brain.”

But he had recovered, right?

Laurie was leaving for work just as her husband walked through the front door. She looked at him curiously.

Sheepishly, Stephens raised his hand and said, “It’s me. My hair has been singed.”

Stephens can laugh heartily about the incident today and then be thankful that, despite all the numerous dangerous interludes of his HPD career, none ever resulted in someone having to sign the sad song of a line-of-duty death to his wife and son.

While Stephens contends that “police work is in my blood,” he points out that it’s also in Brandon Stephens’ blood, DNA and very being. But he made it quite clear that Laurie the wife and mother “is the hero in all of this. She had to deal with me all those years. Now she has to deal with it with her son.”

Mark and Laurie have gone steady since the eight grade “and never looked back.” Policing was part of their life together. Today, most of Stephens’ investigative work centers around alleged criminality.

When Brandon joined HPD five years ago, “they brought my badge out of retirement and I pinned it on him at graduation.”

The younger Stephens is on the Southwest TACT team. You can truly say he’s following in his dad’s footsteps. Stephens the elder, now a long-time private investigator, got his son a PI license when he was a senior at Cypress Fairbanks High School.

The two can now claim a rare distinction. They are the only HPD father and son to both be named Officers of the Year.

For Brandon’s part it was 2018 during HPD’s Police Week Heroes ceremony. The citation reads in part:

“Officer Brandon Stephens is dedicated to every call he runs and exhibits outstanding investigative ability, work performance, dedication to excellence and the desire to make a difference in the community….in 2018, he filed 81 charges, getting violent offenders off the streets.”

Song to the Family

He served on Northeast Division at the time, ranking as the top performer in calls for service for every month in 2018.

That’s a lot to sing a song about.

Mark Stephens’ song has not been sung, exactly, but it has been oft quoted at the celebrations of the lives of a growing number of fallen heroes of the Bayou City and Harris County.

Stephens often serves as a guest commentator on the live streaming of the funerals of fallen heroes aired by KTRK Channel 13. He quoted the song at the station’s presentation of Sgt. Chris Brewster’s service in December 2019.

Please find the words to the entire song adjoining this story.