Can a Houston police officer beat a firefighter in a competition the firefighter trained for on his/her first day at the fire academy?

Firefighters don’t generally throw their axes; they use them in fiery buildings to rescue folks. But their axes are every-day tools.

You might say the only times police officers encounter axes are in those proverbial “double-axe murder” cases that come along about once every generation – or exist only as part of legend.

But an exciting Assist the Officer fundraiser coming up on three Thursdays in June will demonstrate whether those with badges and guns can “out-throw” the axes of competitors with ladders and hoses.

The venue, known as “the ax house,” is Texas Axe Throwing at 23300 Interstate 45 North in Spring. It’s a warehouse/bar type of operation with specially distanced targets and safety measures.

Axe throwing has become a new fad in the Houston area and throughout Texas and elsewhere.

Each of the three events has a special fundraising aspect. All entry fees and donations from spectators will go to the firefighters and officers on their specified competition nights, while the winner will take all funds in the finals.

Funds won by police officers will go to the Assist the Officer Foundation, one of the special group’s latest fundraising opportunities.

HPD Officer Hallie Smith, herself a well-qualified axe thrower, was happy that her charity-oriented axe throwing league set up the event and picked ATO as a funding recipient.

She said the entry fee is $35 per participant and that each team will be allowed 50 initial competitors. “We also accept donations from spectators and other interested parties who support police officers and firefighters,” Smith said. “We will always take extra donations.”

Smith, a night shift field training officer out of Central Patrol, provided a brief history of the axe throwing hobby in a growing number of Houston area bars or “axe houses.”

She said she and her husband, Frank DePaolo, an Army National Guard veteran, and robotic engineer, are both big-weapons aficionados. In 2018 they became acquainted with Houston’s axe throwing culture and joined an axe throwing league.

“There are so many different places you can throw around Houston,” Smith explained. “There’s the Heights, a place off T. C. Jester, one in Sunnyside and another in Pearland. There are six in the general area and others around the state in Austin, Dallas-Fort Worth and San Antonio. The axe houses are popping up everywhere.”

The competition grew and has seen the need for qualified tournament judges, she said, explaining that judges must be qualified through the World Axe Throwing League (WATL) or the International Axe Throwing Federation (IATF).

Two different size of axes are used, the hatchet size and the big axe size.

“We throw from the safety line,” Smith said, “from 12 feet to get a little bit of distance. If you’re too close to the target, you don’t get enough rotation on the axe for it to stick in the target.

The hatchets come in two styles – one-handed or two-handed. “Both are axes but are in the hatchet category,” Smith said. “The hatchet size is the most popular category.”

She smiled when asked if she thought police officers could beat 24/7 axe-bearing competitors that the firefighters would be, saying, “One of the top throwers in the Houston area is a former Houston police officer – my brother Cole! He is technically tops in Spring, not Houston. I think one person at the Houston league has him beat.

“Cole now works with U.S. marshals as a task force officer from the Office of the Inspector General.”

Now Smith had to be plain-spoken and competitive, again smiling and saying, “Yes, he is my brother, and he has also won our last charity event we hosted. So, he is the one to beat! He will be competing on the 17th!”

Smith said her axe-throwing friends in the league have used the tournament format for charity fundraising purposes in the last year or so.

“We do pop-up tournaments for charity, which is what this event is for ATO,” she said. “This will be the fifth or sixth charity event we’ve had in the last year.”

Past events have benefitted a book drive for schoolteachers, Houston Food Bank and Operation Home Front to help military family members families in need while the father or mother is stationed overseas.

“We also did an event for Gold Star families,” Smith said, “and a massive fundraising event for Texas Children’s Hospital. It was a two-part winter carnival.”

She pointed out that Operation Homefront also works with Gold Star families.

And Smith quickly added that these generous axe throwers “did an event for foster families in Houston/Harris County.”

Smith stressed that the axe throwing sport might be new to a lot of people but: “You don’t have to be stellar at this to have a lot of fun. And we want to make sure people know that anyone can throw in the competitions on the 10th and 17th, not just firefighters and police officers.” 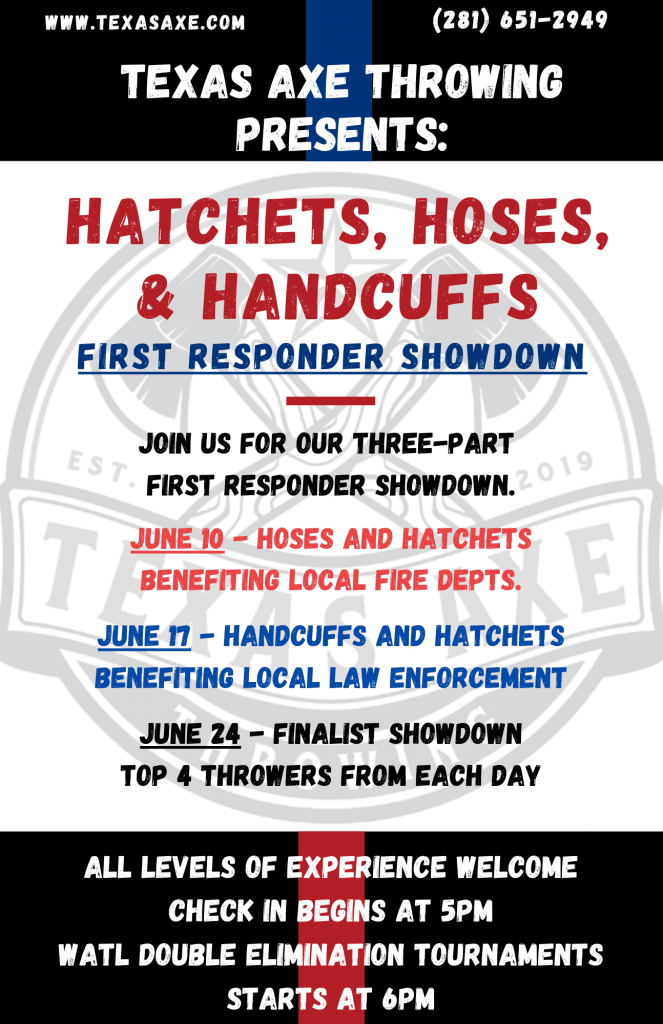