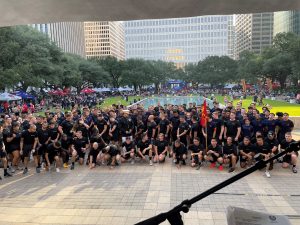 Let us say “as expected” Houston’s 9/11 Heroes Run was the largest tribute in the nation to the heroes who stepped forward on one of the worst days in American history.

“We had the largest 9/11 Heroes Run in the United States,” longtime event coordinator Greg Fremin (HPD Retired) said. “We had over 3,000 people in attendance, the largest crowd we’ve had in the 12 years we’ve been doing this.”

The run drew 2,500 runners of all ages. Following tradition, it began at City Hall early on a Saturday morning.

“This has become the signature event for Houston for 9/11 ceremonies,” Fremin said.

Also following tradition, the Run featured a guest of honor who made an inspirational speech. This year it was Paul McCormick, a retired inspector with the New York Police Department. Fremin said McCormick’s speech stirred the adrenalin in the veins of participants there to honor the memories of the victims as well as pay special tribute to the first responders to the Twin Towers tragedy. 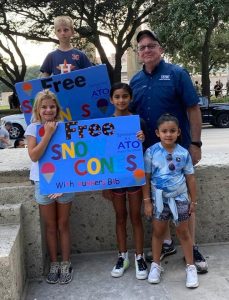 McCormick said, “I was never prouder to be an American, a New Yorker and a member of the NYPD than on that day. Why? Because everyone came together!”

McCormick is the founder of Ground Zero 360, the sponsor of a special 9/11 exhibit that features art work and artifacts from the scene. The exhibit commemorates the victims and first responders. It is part of a traveling “museum” that will be on display at Houston Baptist University throughout this month, Fremin said.

Fremin emphasized that the final fundraising figure had not yet been totaled but said the $80,000 amount was “a safe ballpark figure.”