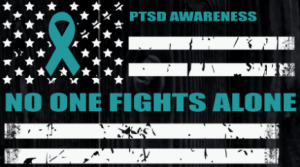 We have the perception that there is a growing public awareness of PTSD – Post Traumatic Stress Disorder – particularly as it relates to men and women returning from combat and law enforcement officers handling the worst of humanity on the streets of Houston and everywhere else.

One well-known recommendation amongst PTSD counselors, many of whom are in recovery, is to write down thoughts in a daily diary or journal, for you see not talking about the trauma that’s part of the job enhances the effects PTSD has on your body and mind.

That’s why two people in the HPD family have recently written and published books on the subject.

Senior Police Officer Matt Marin has penned “Silent Screams” about his 13 years on patrol in Houston.

Both books are available on Amazon.com. You can also buy Whitmore’s book online at Barnes & Nobel.

Whitmore’s journal centers around the multiple trauma he endured as a Marine sniper and, later, as a member of a helicopter crew.

Marin’s tour of HPD duty began with a traumatic event his first day as a rookie officer 13 years ago. On his third day he had to use his Taser. It got worse before it got better.

The Badge & Gun presents accounts of these two books as well as inform its readers about the work of the Birdwell Foundation and the PTSD counseling facility known as Fort Valor near Conroe.