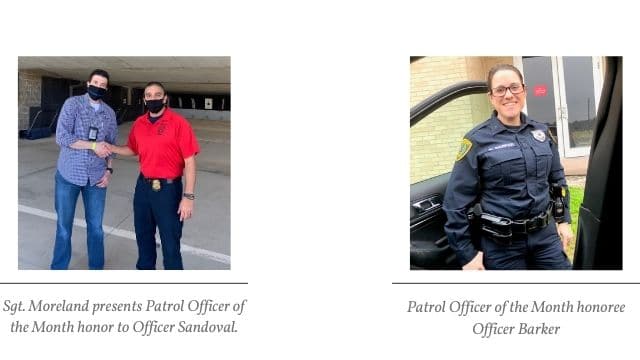 The HPOU recognized Sgt. Rob Sandoval and Officer Shannon Barker as Officers of the Month for October for their diligent work to help cadets in Academy Class No. 245 retake the test they needed to graduate.

Here are the facts of this great effort.

Officer Shannon Barker went outside of her responsibilities at the Academy and got the cadets study materials, while contacting TCOLE about the high fail rate.

While Officer Barker was scrambling for the BPOC and study materials, Sgt. Sandoval, an HPOU board member, began interviewing instructors at the Academy to determine what may have happened. He also obtains additional study materials for the cadets. He contacted TCOLE for advice.

As a result of contacting TCOLE, Barker and Sandoval were able to get the third test delayed, which gave the cadets more time to study the BPOC.

This commitment ensured that every cadet had a fair shot at graduating the Houston Police Academy. Records show 14 cadets were able to pass the TCOLE test on the third attempt.

And, because of their hard work and commitment to the Department, the Academy and the cadets, the sergeant and the officer made it possible for the four cadets who were unable to pass the third test were able to start the newest cadet class without a break in pay/service.