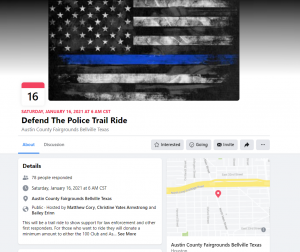 Elaborate plans are underway for what is known as the Defend the Police Trail Ride, a fundraiser and public awareness campaign designed to promote better educate citizens about the everyday dangers police officers encounter.

Clear Lake Patrol Officer Cory George, a lifelong horseman, thought of the concept amidst the current anti-policing attitudes in some parts of Texas and the United States.

“We need more support,” George stated. “I want something big. I want it big and want it to show not just here in Texas and Houston but everywhere that there are people who still care about police officers no matter what the media says.”

The plan: a four-hour trail ride from Bellville in Austin County to Brenham in Washington County. The date: Saturday, Jan. 16.

The veteran patrol officer attached special significance to spreading the message “from Austin to Washington,” a clever plan on words and the message to elected officials.

George said three different routes are being considered and are ranked based on the amount of vehicular traffic that trail riders would be up against.

“We know where our start is and where our end is,” the officer explained. “We just need to figure out the safest and the trail that will provide us with the most fun.”

George said the funds raised would benefit Assist the Officer Foundation and the 100 Club of Greater Houston. But he stressed that education would be the trail ride’s major emphasis.

“We want the citizens to take the time to find out what we do,” he said. “There is so many options to learn about our career – the Citizens Police Academy, the ride along. Don’t listen to the media that already doesn’t like us.

“Find out firsthand. Talk to us. There are so many opportunities for citizens to come out and learn what we do.”

To that end, George will require officers participating in the trail ride to write letters to public officials “outlining what they think can be improved. Instead of listening to people who never walked in our boots telling them what improvements to make, these officials will hear everything officers want them to know about the job. It will all be in these letters. They will hear what it’s like to have a silver badge.”

He stressed that citizens supporting police, the officers themselves and “first responders everywhere” will be welcomed to hit the trail. He cited ATO as the highest priority of HPD officers but pointed out that he wants the 100 Club involved as a beneficiary “because they support all first responders.”

“We’re not getting our voices heard,” he said. “The things that people are hearing are not from people on the ground. They don’t know how our job works. They don’t know what happens every day.”

George said to stay tuned for further updates and opportunities.